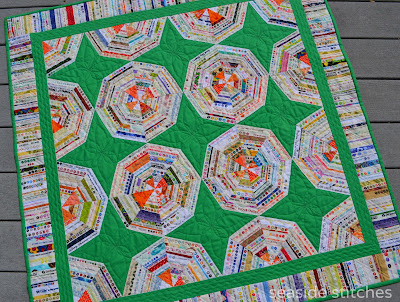 I started this quilt two weeks ago at my guild's quilt retreat. Our instructor, Chris Bagley, did a great job inspiring us with several samples with different flavors. I'd like to make another spiderweb someday, without selvages, and include some fussy cut centers. Can you see the orange pinwheels in the centers of the spiderwebs? That's my nod to 2012's Tangerine Tango. 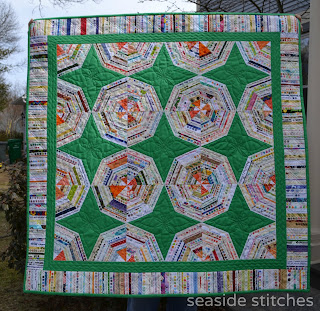 The piece of Kona Fern I had left over was not quite wide enough for the back, so I pieced a strip of long selvages to add a few inches. I had intended for the stripe to run horizontally across the back so you could read the selvages, but I laid out the top wrong. I didn't realize my mistake until I was ready to add the sleeve. Oh, well. At least it is not completely upside down! 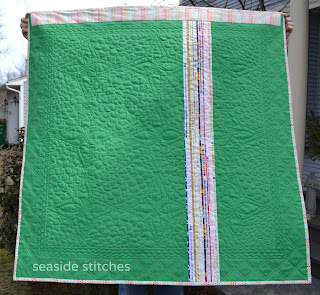 The first class that Karen and I took at MQX in Providence in 2010 was with Pam Clarke. I use Pam's concept of "quilting inside the lines" all the time, including in the green between the webs. The motif was machine quilted, free hand, so it is not perfect. All I marked were the diagonal lines. I used a chalk roller, so by the time I was done quilting, the lines were mostly gone. You can just see a hint of that gray line. 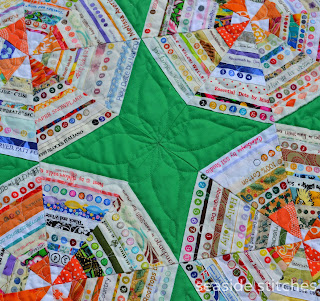 In the spiderwebs, I quilted a mum-like flower. You can see it better on the back. I quilted the Celtic  outer border from the back because it was easier to mark the grid on the solid. This is becoming a habit for me! 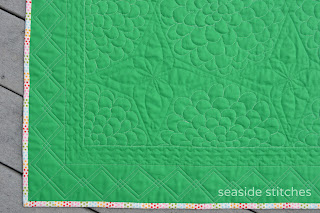 I knew I wanted a green binding on the front, but there was too much green on the back, so I tried a two-sided binding for the first time. There are several tutorials online with various cutting dimensions. This is a good one from the Pattern Basket. It's a cool idea that I'm sure I'll use again. 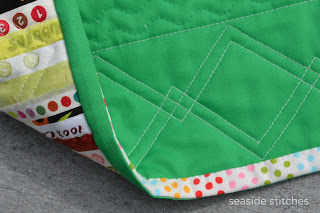 I'm so happy to have another quilt finished! 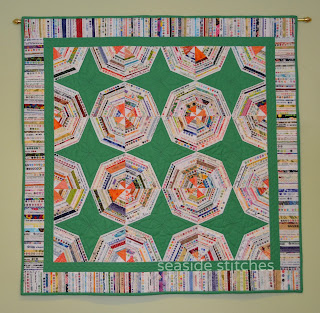 That came out beautifully and the greens make a stunning contrast. I need to get some of my tops ready for quilting, I have to do free motion so it will be practice and hopefully I won't make too much of a mess.

oh this is great fun!! And the binding! Never seen that before! Thanks for sharing, Tina!

This is really pretty. I love the green.

You have inspired me to quilt my completed spiderweb top.

Wow Tina this is gorgeous! I love the bits of orange and the quilting and the fern green and the binding!
You are amazing! I'll get this on the Selvage Blog right now.

Fabulous Tina. The pinwheels in the centres are a very clever idea. I have used that method of binding several times and it gives a great firm edge to a quilt. Well done to you.

Your selvage quilt is a real beauty! Salvages are so much fun to use in a quilt...I love reading them and remembering the fabrics. Great job!

It's wonderful and I love the binding!

Love your selvage spiderweb and that your son is joining the USMC.

I love it! I plan to start one of these too, I love how you've done yours!

This is a wonderful quilt! Very vintage and sweet.

What a gorgeous quilt! And your quilting is wonderful.

I love selvege projects! this reminds me why I keep saving them up. love it.

I love this! The green against the little dots is so fun!

Lovely! I have never seen a two sided binding before. Looks great!

Beautiful! I lvoe how colorful your selvages are and how they really pop off the green. Your quilting is so pretty, too.

Rachel at Stitched in Color said...

Oh, definitely this is one of my favorites! So pretty to see green used like a basic.

Wow I can't even imagine having that many selvedges to use! Amazing!

This is gorgeous and I think one of my all-time favourite quilts. stunning!

This is so amazing! How wide do you normally cut your selvedges? I never know how much to cut off if I plan to make something with them later. Did you use the normal 1/4 inch seam allowance?

I've seen a couple of green spider quilts and love them. Yours is stunning. Love the quilting! It's the first time I've heard of two sided binding.....great idea! (guess I'm getting behind in my reading)

Your quilt is amazing! I love the quilting (I'm a big fan of quilting inside the lines).