After 19 months and hundreds of hours of work, the Engineer's Wife Sampler quilt is complete. I started calling it that way back at the beginning because my husband is not a farmer! You can see I went my own way from the start with this quilt, but I loved working from Laurie Hird's book. 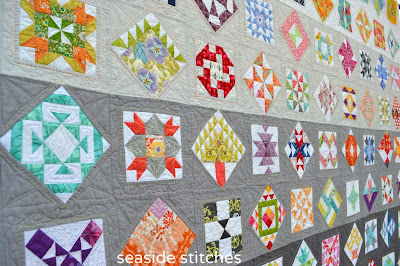 This post is a little long, so feel free to just look at the pictures!

January 26, 2014: I blogged that I might make a few blocks from this book for a table runner. Then my friend Sharon mentioned that she had started piecing this quilt. Knowing that there was someone nearby to commiserate with was somehow comforting. And challenging! 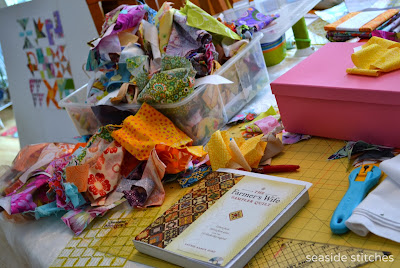 February 17, 2014: Day 1. As I pieced these blocks from my modern scrap bin, I made quite a mess! I pieced the blocks in numerical order, and wrote the date I completed each block in the book. 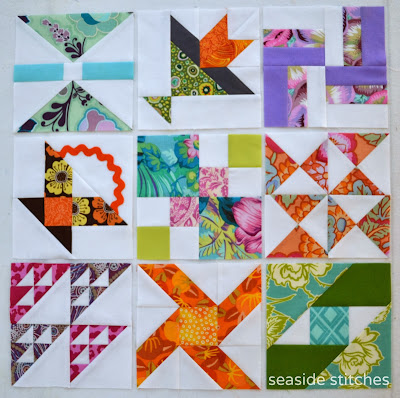 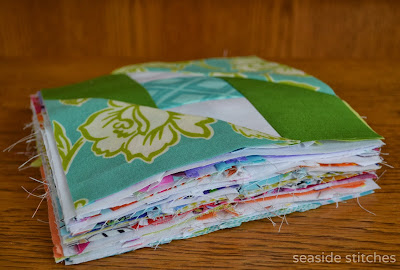 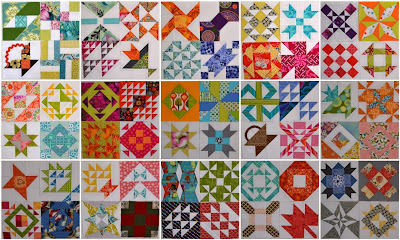 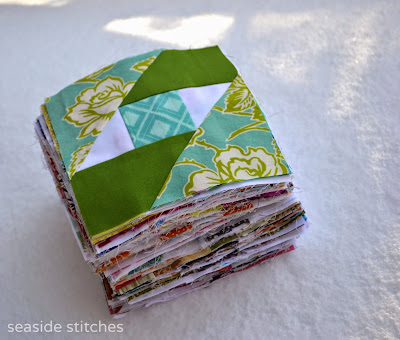 March 2015: My original layout plan was to use alternate gray and white hourglass blocks. I made 8 of them and decided I really didn't want to make 100 more.

June 26, 2015: Layout plan B. The gradation in the background was inspired by a class with Vanessa Christenson. I had seen other samplers set like this (half on point, half straight) without the gradation. It's interesting to see how the colors pop differently on the various shades of gray. 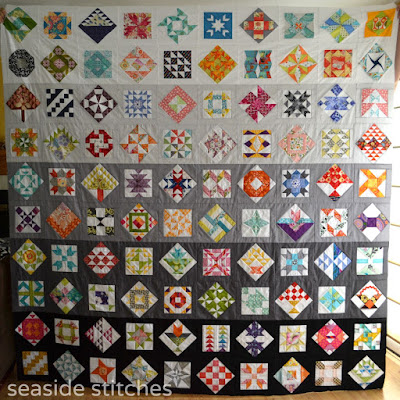 September 5-23, 2015: Hand and machine quilting. I started at the top, center. I would hand quilt a few blocks, then machine quilt them. After a few rows, I discovered that the best method for me was to machine quilt in the ditch around each block, then fill in the block with machine quilting (all in white thread, different design for each block). Then I hand quilted 1/4" around the blocks. Then I went back to the machine to quilt the background. 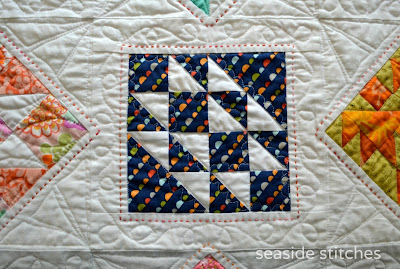 Hand quilting was done in a hoop on the dining room table with variegated #5 perle cotton and a no. 3 embroidery needle. I really enjoyed this process, but soon discovered that 100% cotton batting is not ideal for needling through, especially with thick thread and a big needle. (Apparently, wool batting is quite nice for hand quilting.) 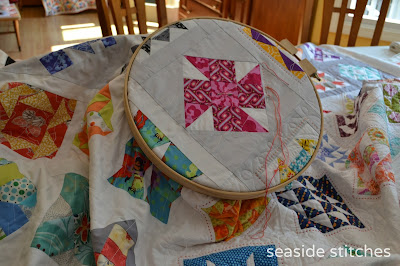 I used a different color thread to hand quilt each background color. One stitch at a time. 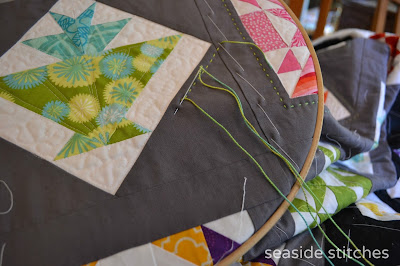 Machine quilting was done on my trusty Bernina 153 on the kitchen table. The background was quilted with thread that matched the fabric color. Fortunately, I found a chart online that matched Aurifil colors with Kona colors. This photo commemorates the completion of quilting. 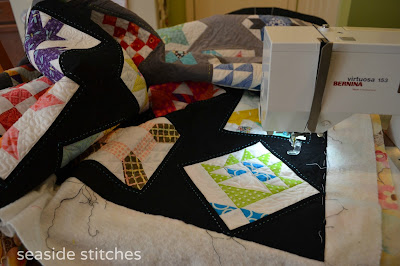 September 24, 2015: The binding matches the background colors - white on top, black on the bottom, sides pieced to match. (will add photo when I get the quilt back)

Since I only used 100 blocks on the front, the remaining 11 went on the back. Ten are pieced into a strip through the middle. (That area was fun to hand quilt through. Not!) 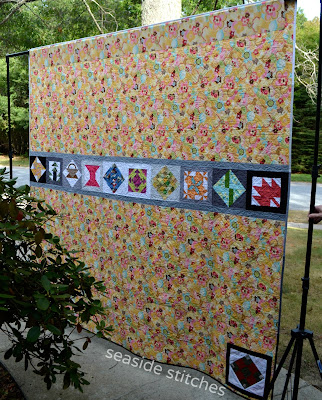 September 25, 2015: The last block became the label. Since it is so large, I "quilted" some lines and a heart so it wouldn't flap around. The stitches only go through to the batting and don't show on the front. 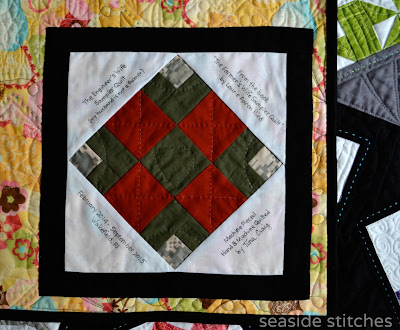 I am really proud of this quilt. You can see it (with Sharon's and Donna's) at the Ninigret Quilters show this weekend in Westerly, RI. It has also been accepted for exhibition at A Quilters Gathering in Manchester, NH, in early November. 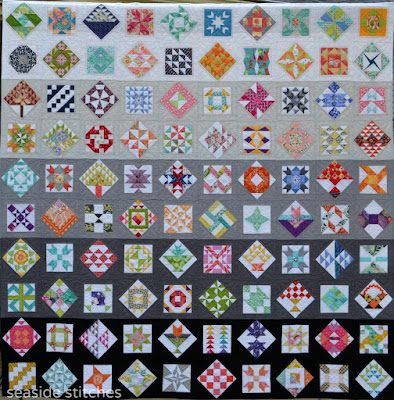 Wonderful job! I can't wait to see it at the show!!

Tina, It is absolutely stunning!! I love your take on it!!! Bravo!

What a beautiful quilt. You did wonderful work in the piecing and quilting.
Congratulations!

THE BEST version yet! I'm awe struck by this setting. It's brilliant. I was thinking of doing some on point as well, but this is fabulous!

I love this setting and the combination of hand and machine quilting - they really showcase all those beautiful blocks in such a great way. The result is absolutely fabulous!

This turned out so beautifully! I just love how you personalized it with the setting, the layered backgrounds, the hand-quilting, and the matched binding. What a lovely accomplishment!

Tina, congratulations on your finish of this lovely quilt, it looks amazing how you chose to set it and mix the hand and machine quilting!

Enjoy this beauty for many years.

Absolutely beautiful. Oh I wish I were as talented. I LOVE the way you did the back,

A wonderful quilt,Tina! You can and you have to be proud of this amazing quilt!
Greetings, Rike

For the first time in my life, I'm thinking that I wish I lived in Rhode Island so I could see your magnificent quilt in person. But, California is too far away to visit the show. I'll hope that, someday, I will see it hanging at the Road to California Show.

You reserves to be so very proud of all the work you did, your quilt is exquisite!

It's stunning. I've yet to start my version but I'm slowly collecting fabrics. I love the idea of graduation of colour for the setting. I may have to steal this idea

Your quilt is absolutely beautiful, great choice of fabrics and thread. It's made me want to buy the book and make a quilt.

I've made this quilt and it seemed to take forever. By the way, the authors name is Laurie Aaron Hird, not Julie.

I've made this quilt and it seemed to take forever. By the way, the authors name is Laurie Aaron Hird, not Julie.

Oh my goodness, that is one of the most amazing quilts I have seen. So much work, your colour combinations are fantastic and the workmanship outstanding. Well done.

Wow you should be proud of this accomplishment. The quilt is awesome. So much work and time. Great job.

Lovely! Your work in inspiring!

I so love your layout and how you made it your own. Just stunning.

Fantastic, I'm enjoyed read this post, Every time search this type of post. Really I enjoyed. This article is really very interesting and effective. I think its must be helpful for us. Thanks for sharing your informative. Buy Twitter Followers