Stippling. I've gone through three bobbins already and I have a looooong way to go. 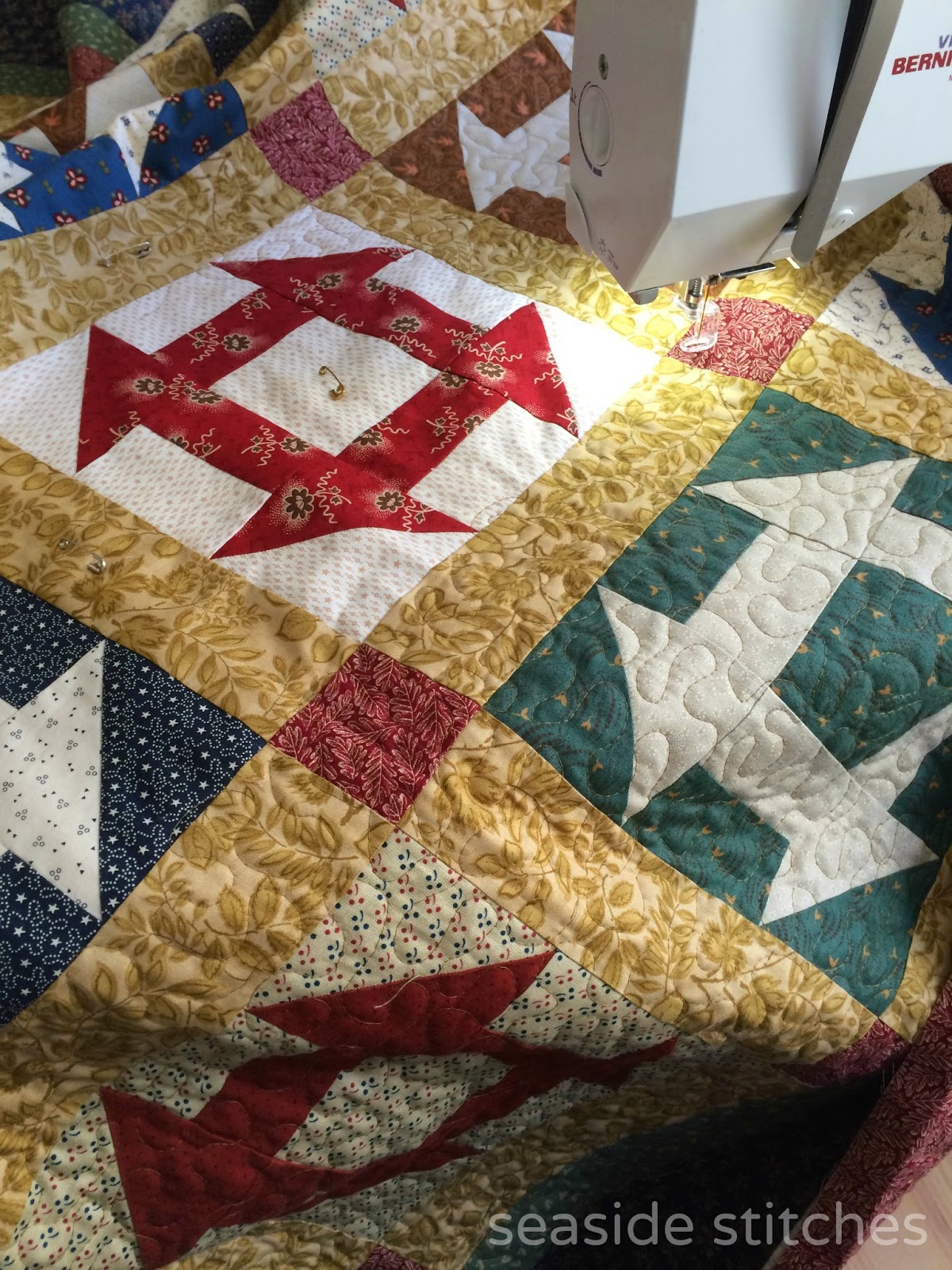 My friend Pam and I headed to Connecticut this week to drop off quilts for an upcoming show. If you are in the Northeast next week, don't miss Flights & Fantasies at the New England Air Museum. It runs all week, September 22-28. This is the only quilt show that my husband actually enjoys.

Of course, we had to stop at some quilt shops along the way! Our first stop was Quilting by the Yard in Vernon. I found the yardage in the clearance section for 50% off. They are not my style, but I need it for a secret gift project. The charm pack of Figurines was an impulse buy for me. We had to have lunch at Rein's Deli, conveniently located in the same plaza. 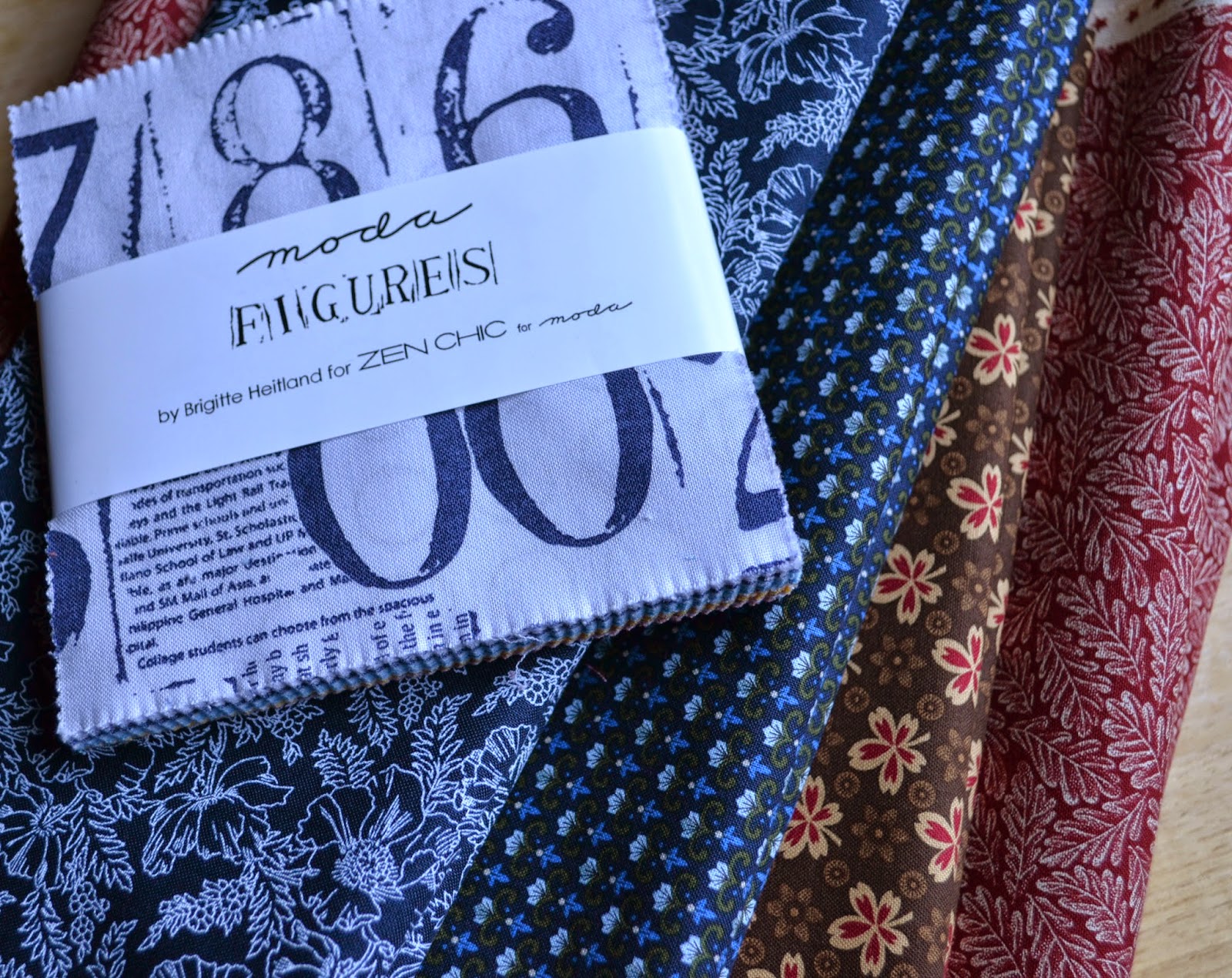 Our next stop was Sew Inspired in Simsbury. As soon as I walked in, I saw the huge display of Cotton & Steel and was blown away! I hadn't seen any of it in person yet, and it really wasn't appealing to me online. Boy, do I love it in person! Since I wanted it all, I picked through the fat quarter basket and restrained myself with only 11. The green Joel Dewberry doesn't go with them. I need that color for the wedding quilt. 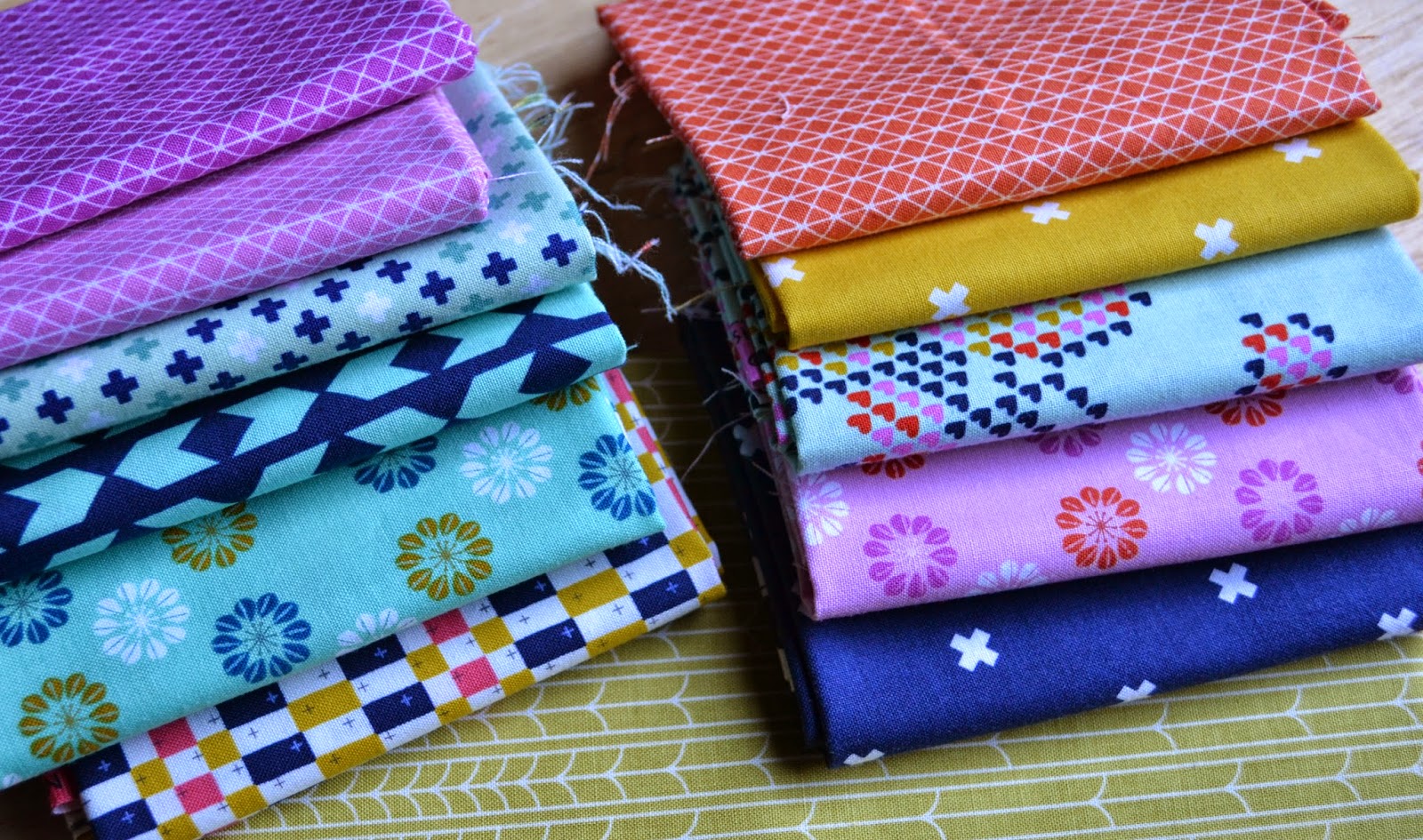 After a quick stop at Michael's for glue and hardware for an upcoming class, we arrived at Jackie's house. I ordered some Kona solids and black & white prints during the Canton Village Quilt Works sale last weekend. It was able to pick up my package and see Jackie's home-based business. 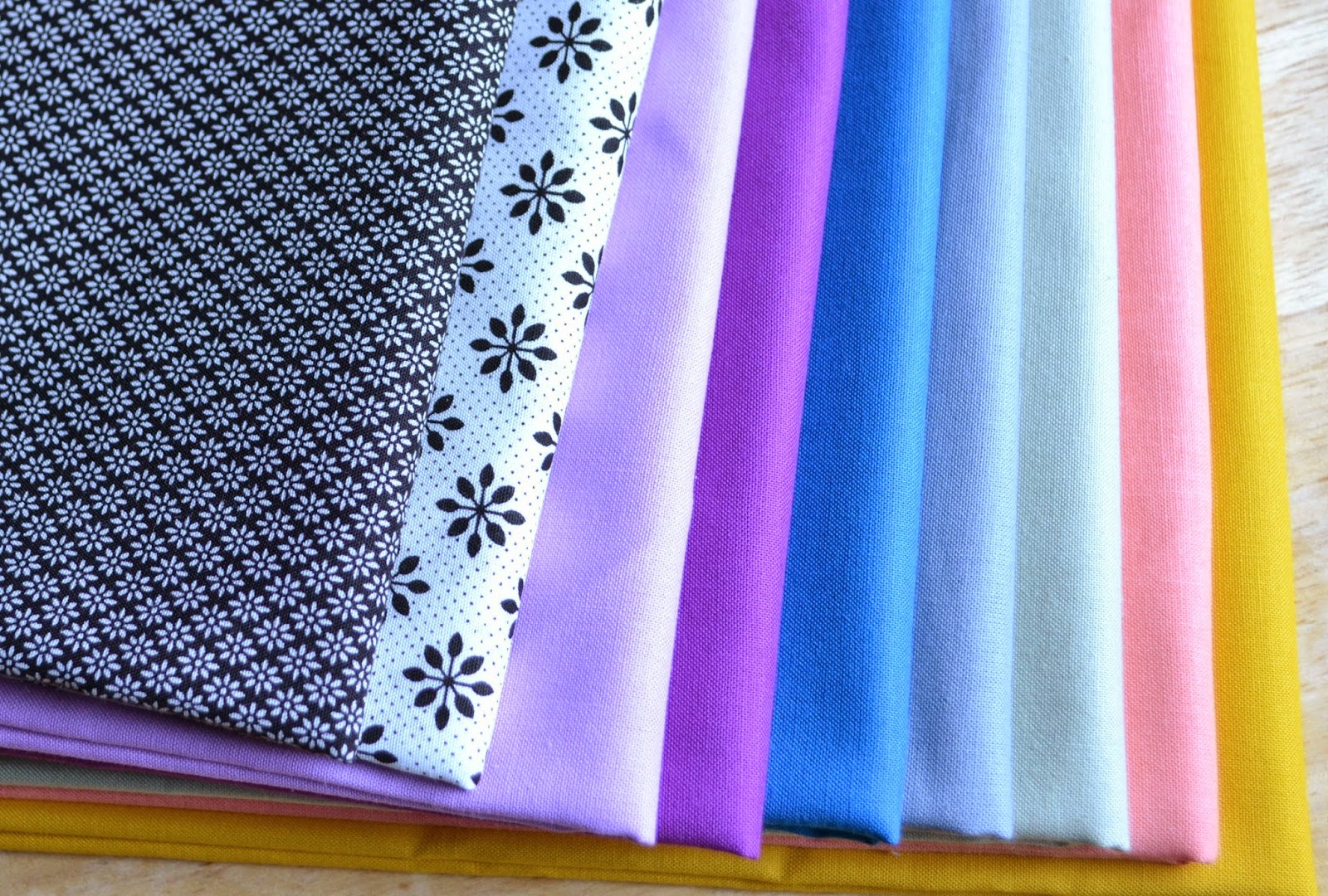 These bandanas arrived in the mail from The EGA Shop. I'm planning to make a pillow for Pete's bed with the red and black ones. They are 100% cotton, but fairly light. I might need to add interfacing to make the fabric more durable. The camo print might be made into key fobs. 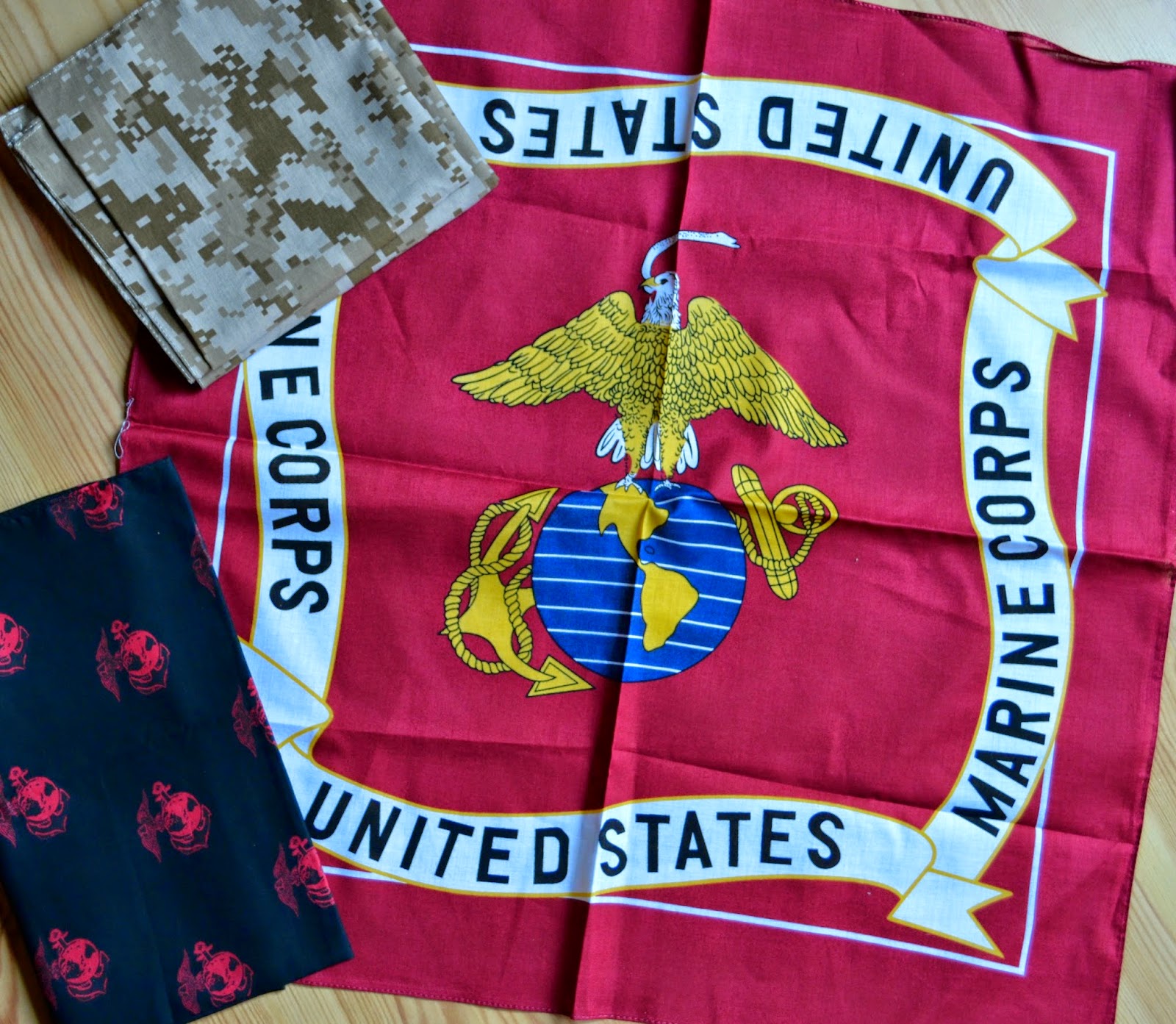 That is just too much fabric coming in without any finished projects going out. I need to get busy!
Posted by Tina Craig at 9:14 AM 4 comments:

Here it is! Mark & Heidi's wedding ring star! OK, it's only the center of the top, but I'm happy to have this much done. They are getting married today in New Hampshire! I hope I'll have a chance to show it to them, although she already saw it on Instagram. I've done 90 hours of work on this already (about 50 in the last 2 weeks), with borders and binding to go. I'll send it off to Pat for quilting! 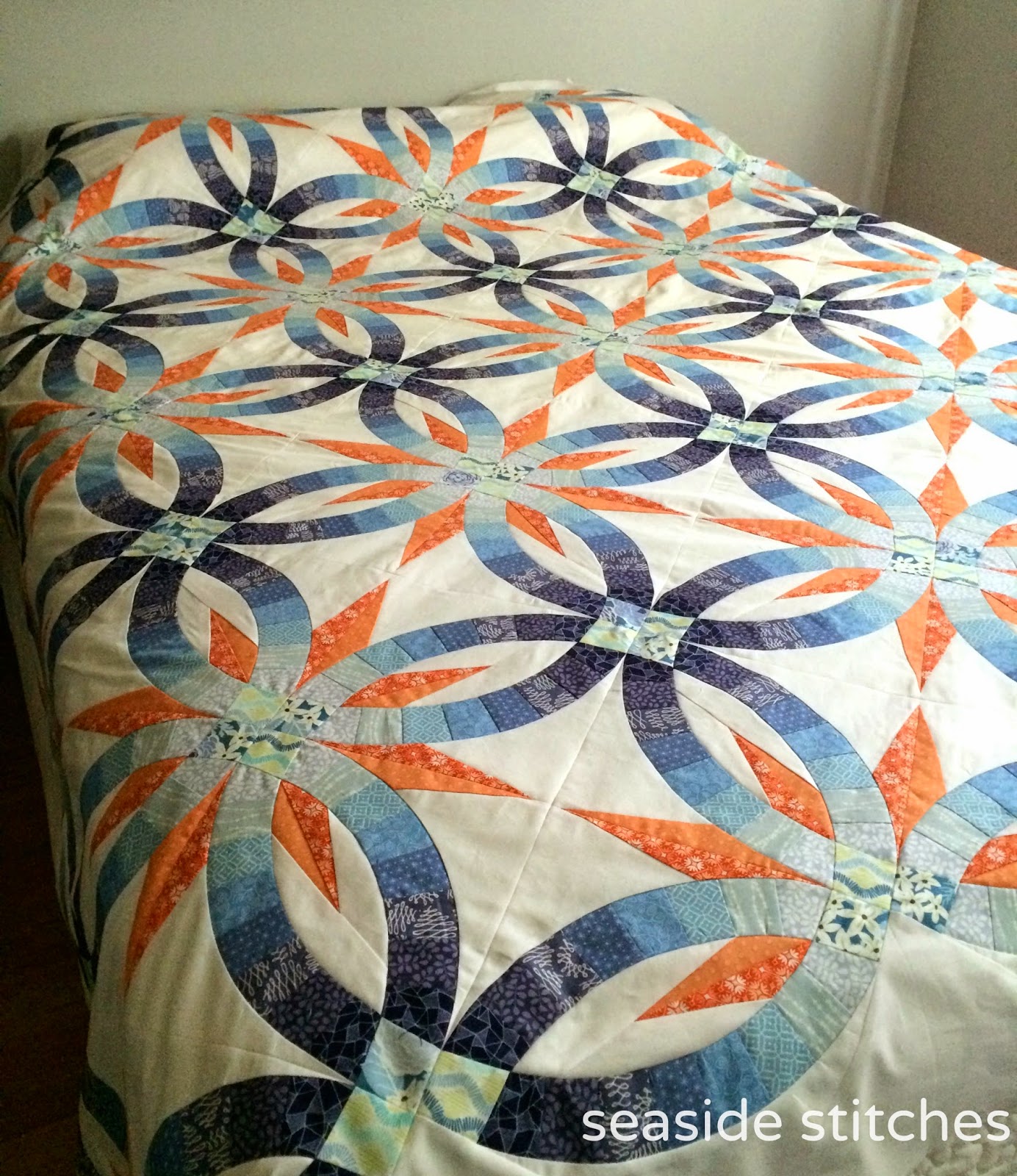 Jamie and Christopher's quilt is on display this weekend at the South County Museum show. Next week it will go to the Flights and Fantasies show. And then, they can have it back! 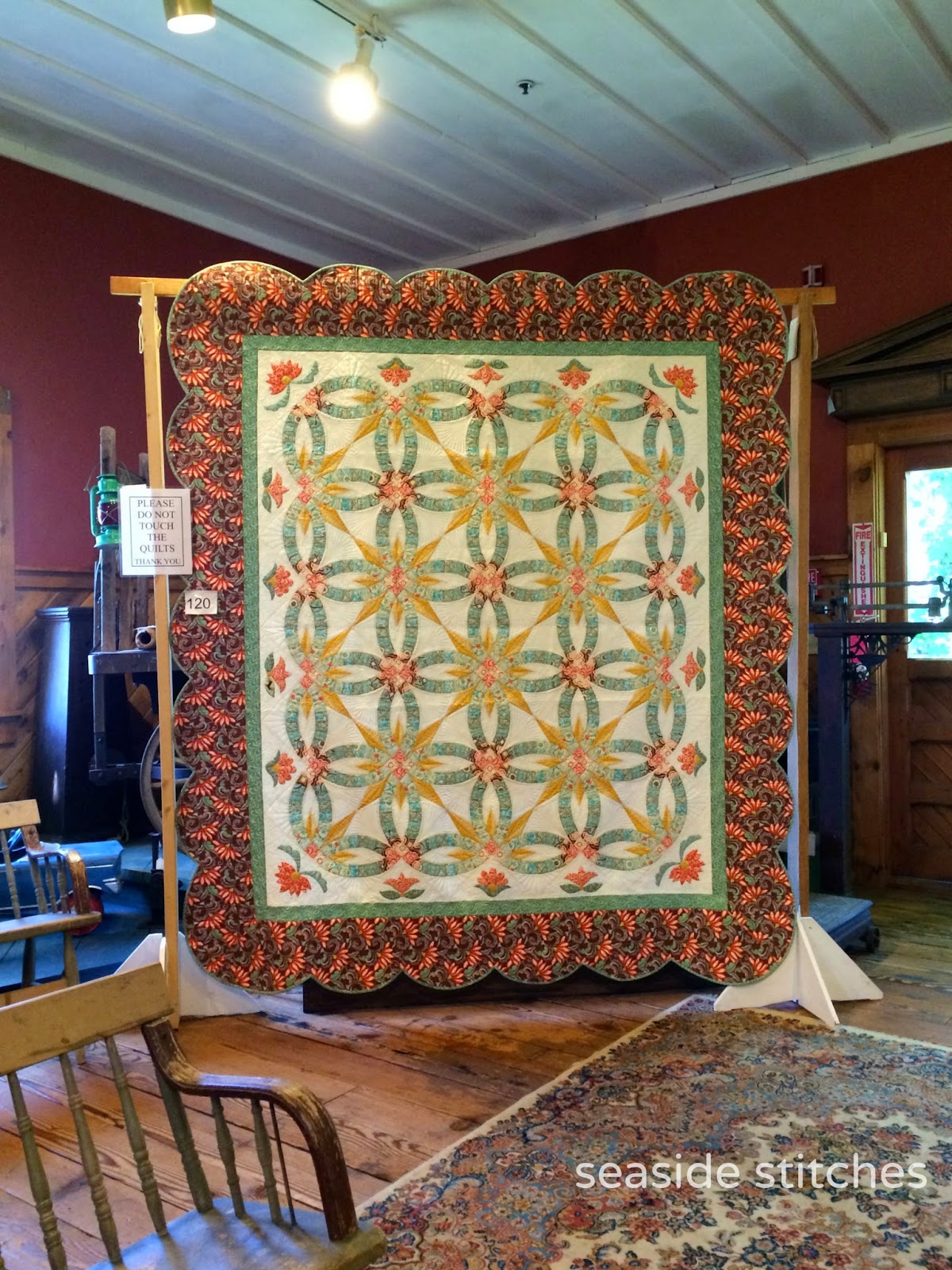 I love how they hang quilts from the rafters of the museum. 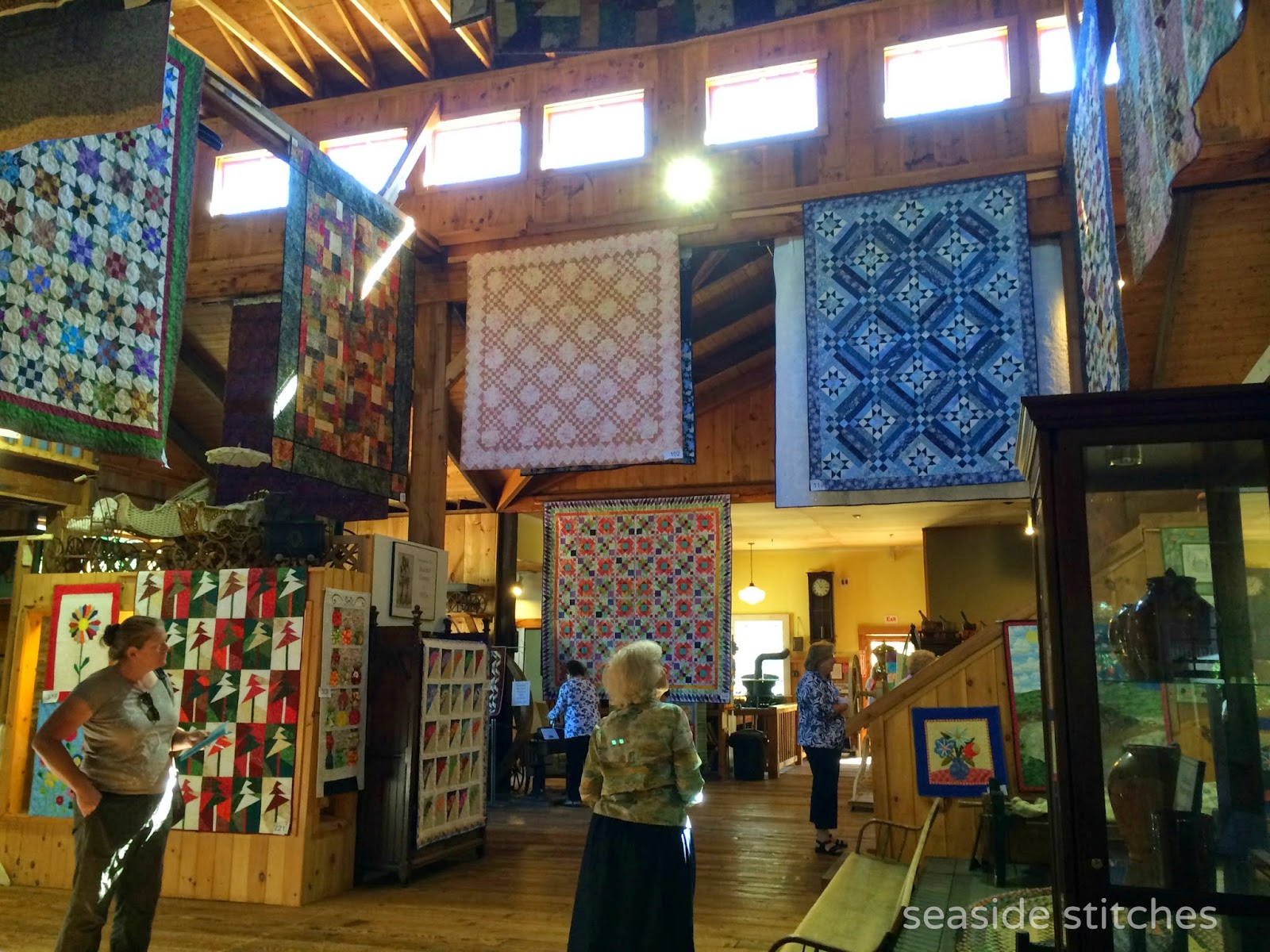 In non-wedding news, Julia is safely settled in Tanzania. How great is this picture of a herd of zebras?! 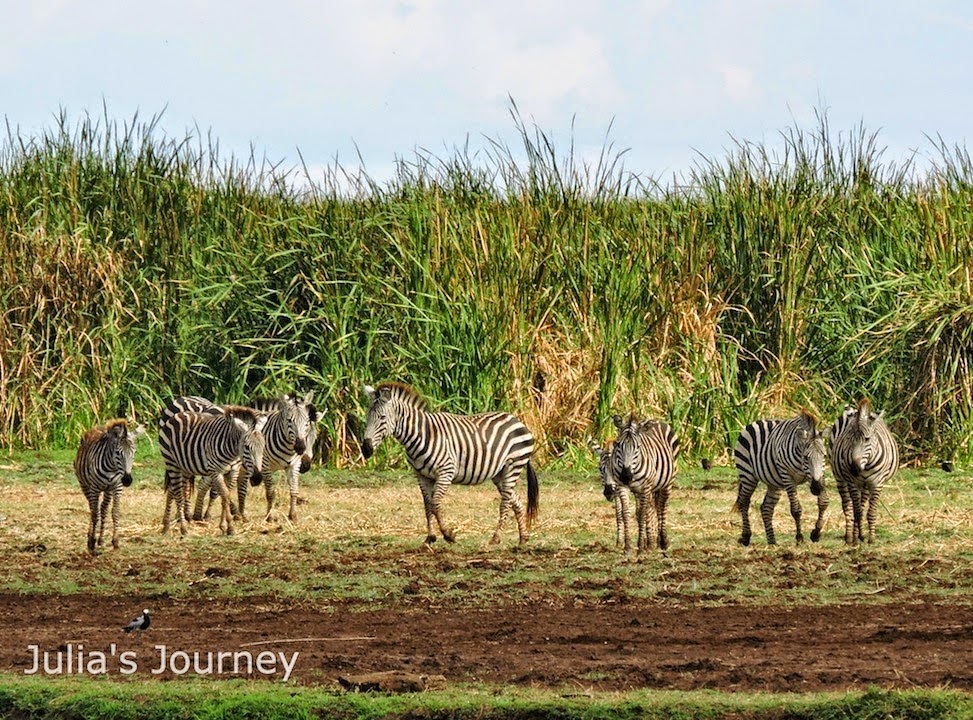 Have a great weekend! We're off to the wedding!
Posted by Tina Craig at 10:13 AM 9 comments:

All the parts are done except the melons, those wedges in the center. I'll finish the last 50 today after some volunteering at church. 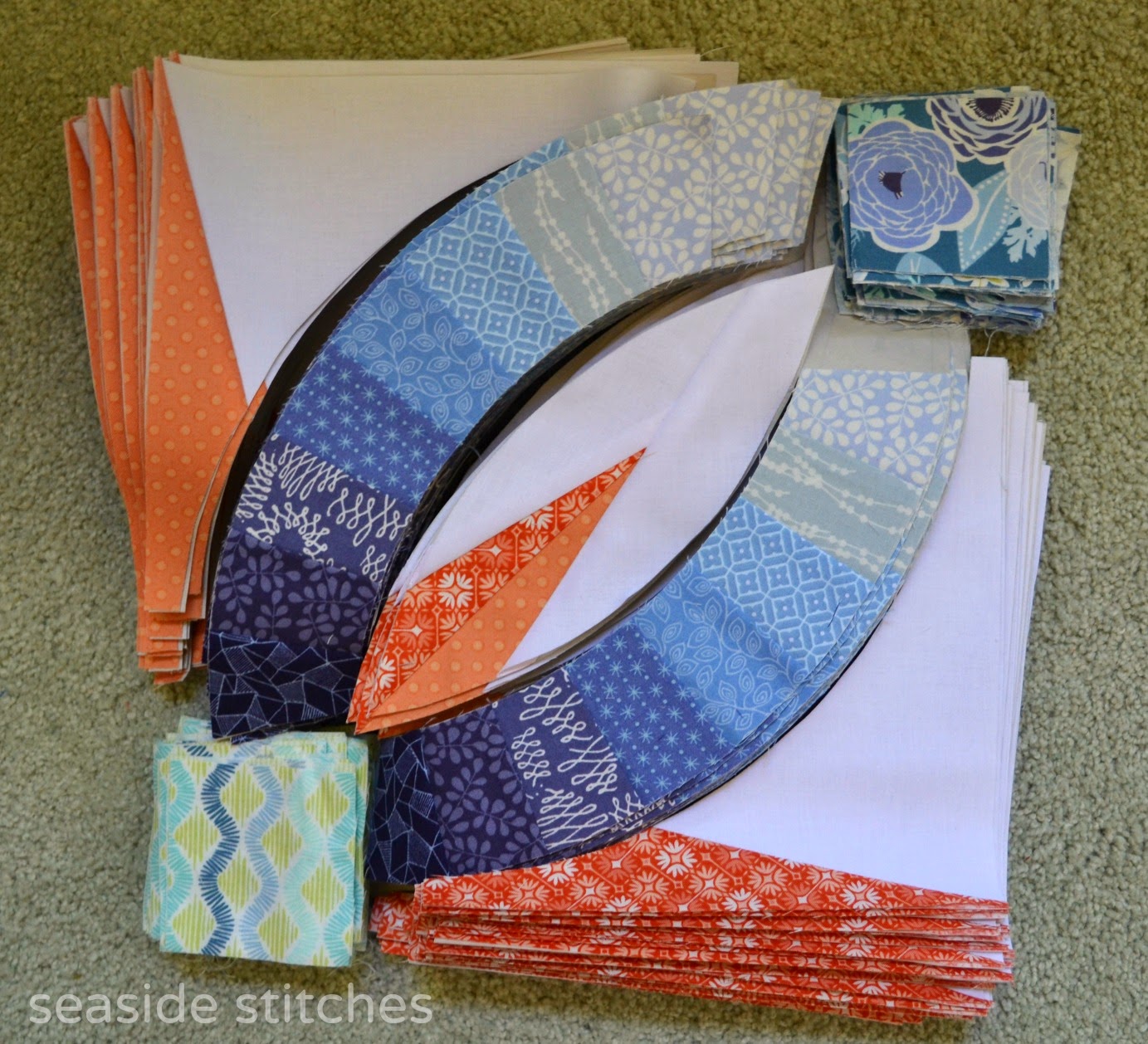 Can't wait to start sewing these together!
Posted by Tina Craig at 9:34 AM 7 comments:

This week, I thought I'd show you my current set up. Only two rooms in our house have air conditioning, so when it's particularly hot and humid, I move my sewing into my bedroom. The Featherweight sits on a small folding table. The second table holds the fabric parts and an iced tea. 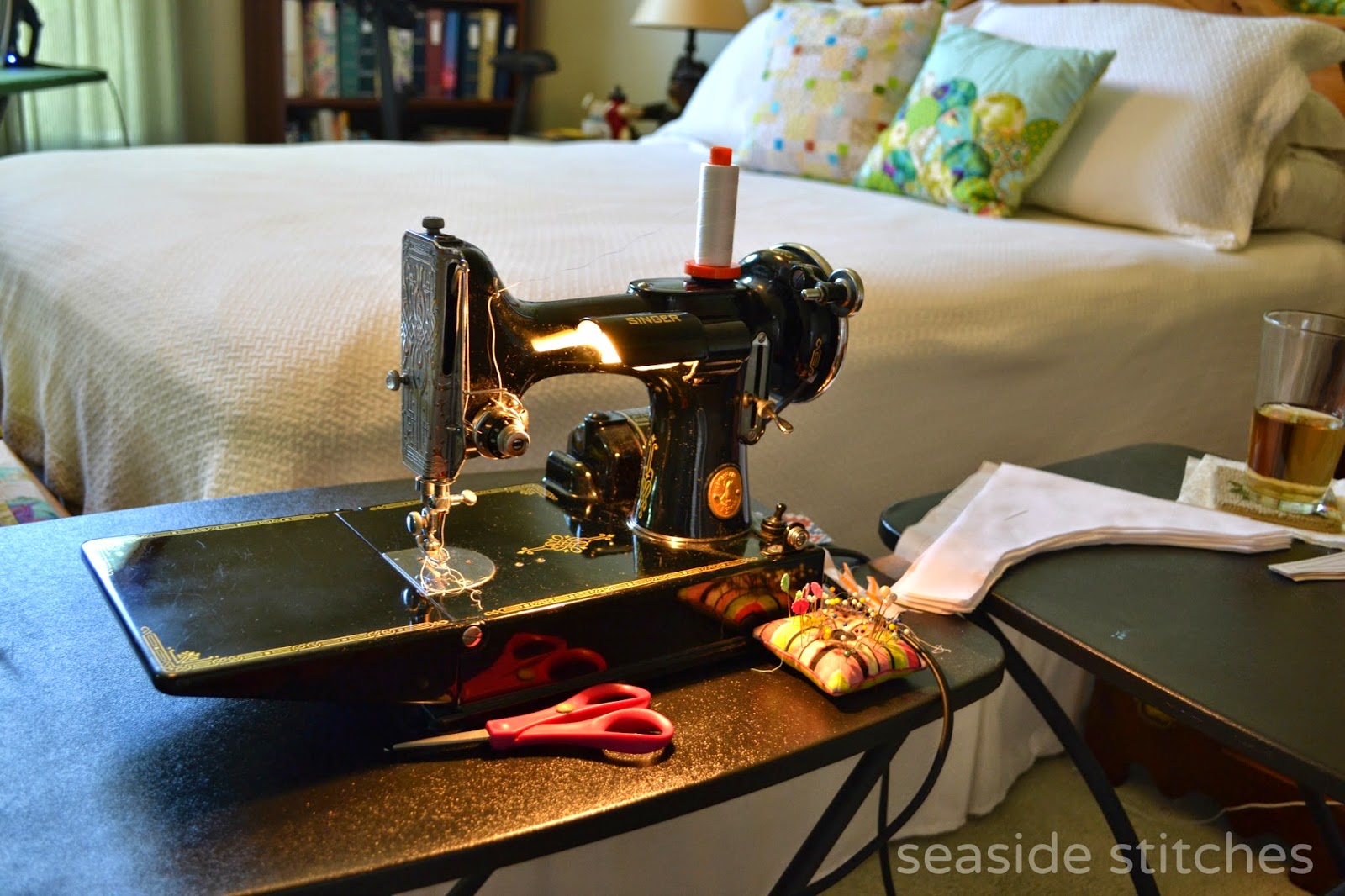 If I slide the jewelry boxes over, my dresser is a great height for cutting. (This pattern creates a lot of trimmings! I just emptied those bags.) 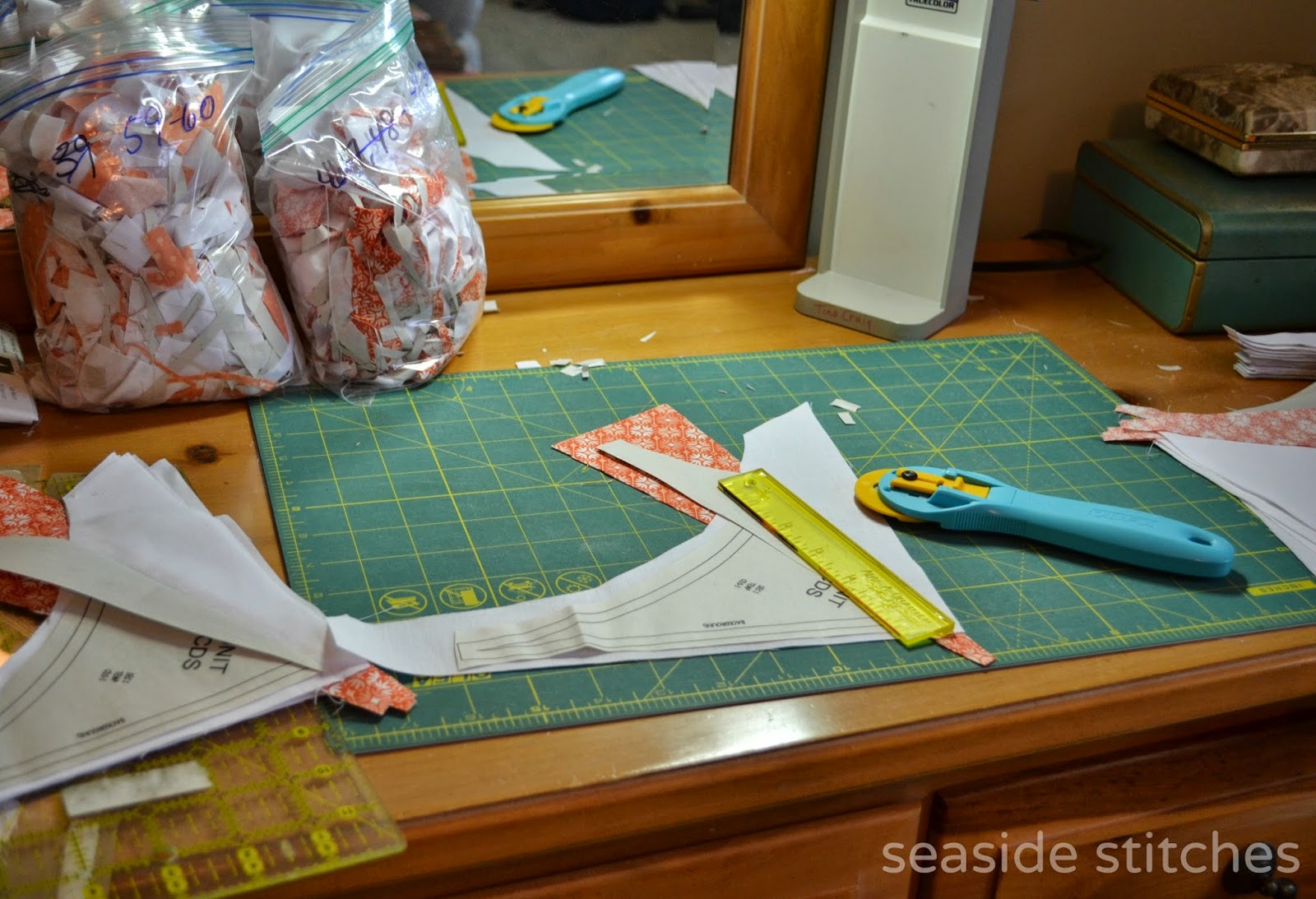 The ironing board is always set up in front of the window. I just have to clean off all the lint and bits of thread each night before Bill irons his clothes for work. 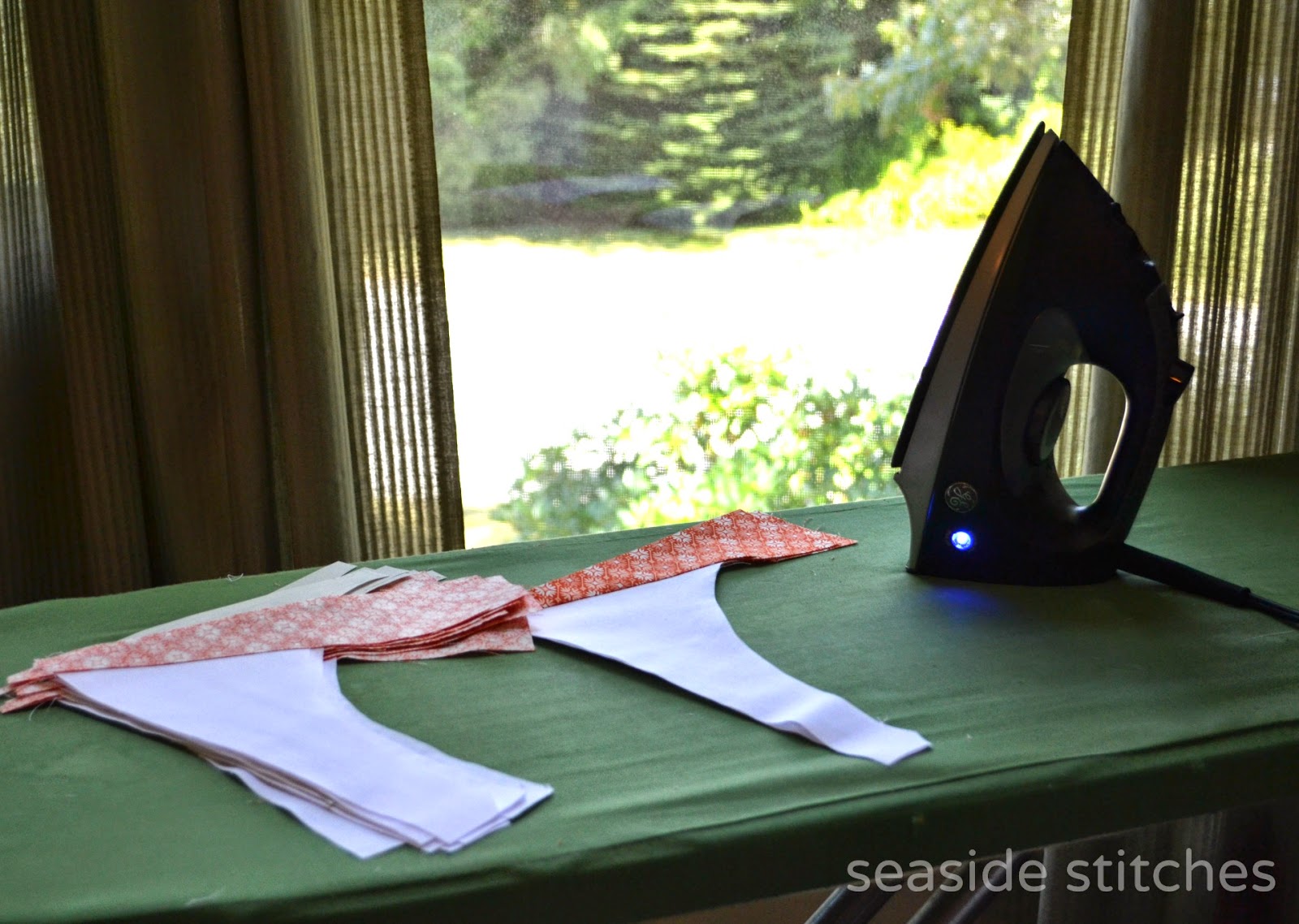 I'm plugging along, piecing about four hours a day. I should have all the parts done by Friday.
Posted by Tina Craig at 3:33 PM 3 comments:

After driving Pete to the airport this morning at zero dark thirty, and then a quick nap, I worked on some bee blocks. The RI Modern Quilt Guild just started our first bee. For the first month, Suzanne chose these adorable Sunshine Star blocks from 42 Quilts. 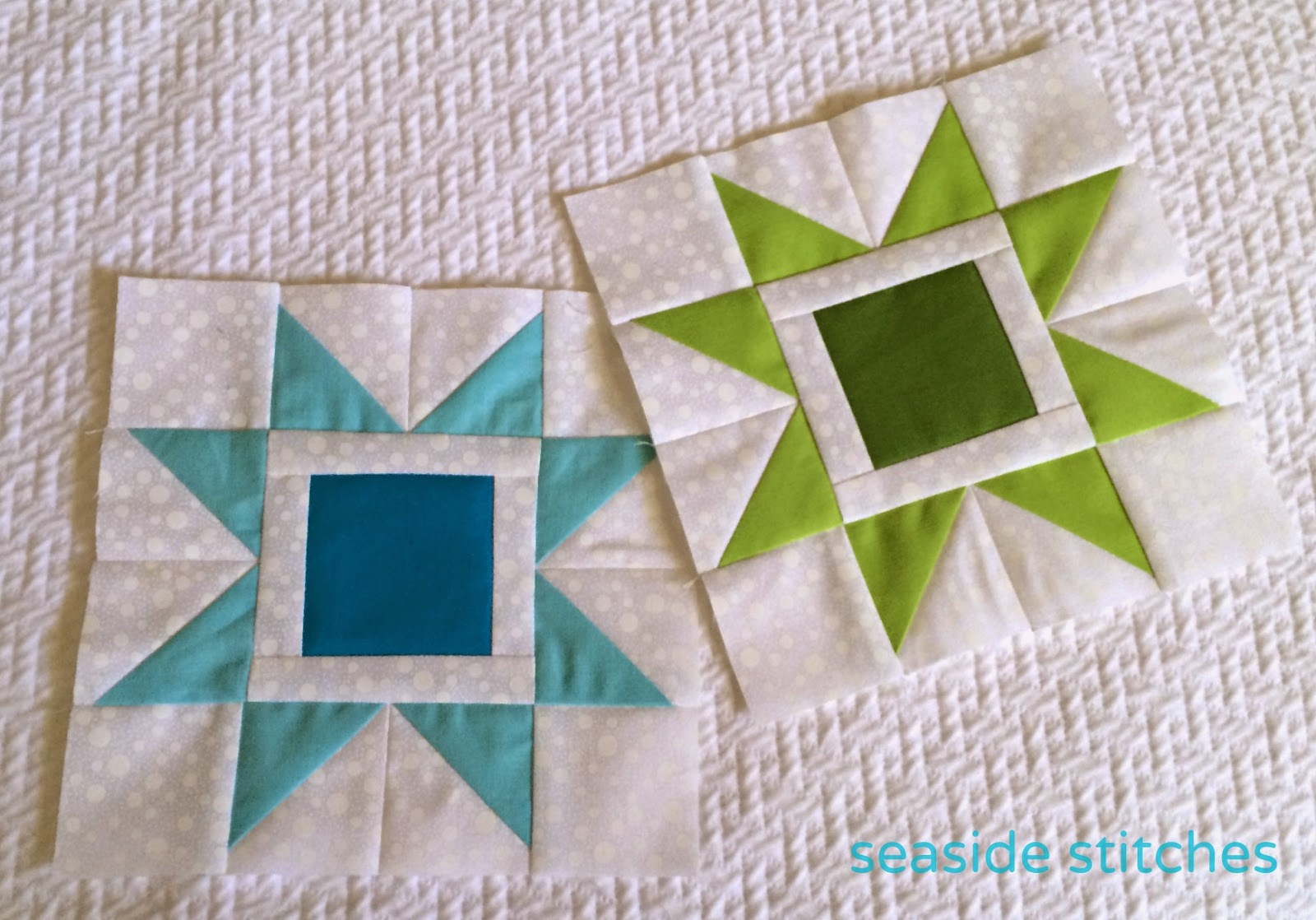 When I started clicking around the 42 Quilts blog, I was excited to see all 64 blocks that Jennifer designed for her Modern Monday series. I think I might make a bunch of these to replace the Farmer's Wife blocks I'm really not crazy about. I'm such a rebel!

With Pete home for the weekend, we decided to make the most of our one day together before Julia left for her semester abroad. We wanted to go on a hike, so Julia brought us to Norman Bird Sanctuary where she worked this summer. This picture was taken at the top of Hanging Rock, high above Gardiner Pond and Third Beach. I just can't resist taking a picture of them on the trail every time we hike together. This is my new favorite trail. There's a little bit of scrambling up rocks, but the views are well worth it. 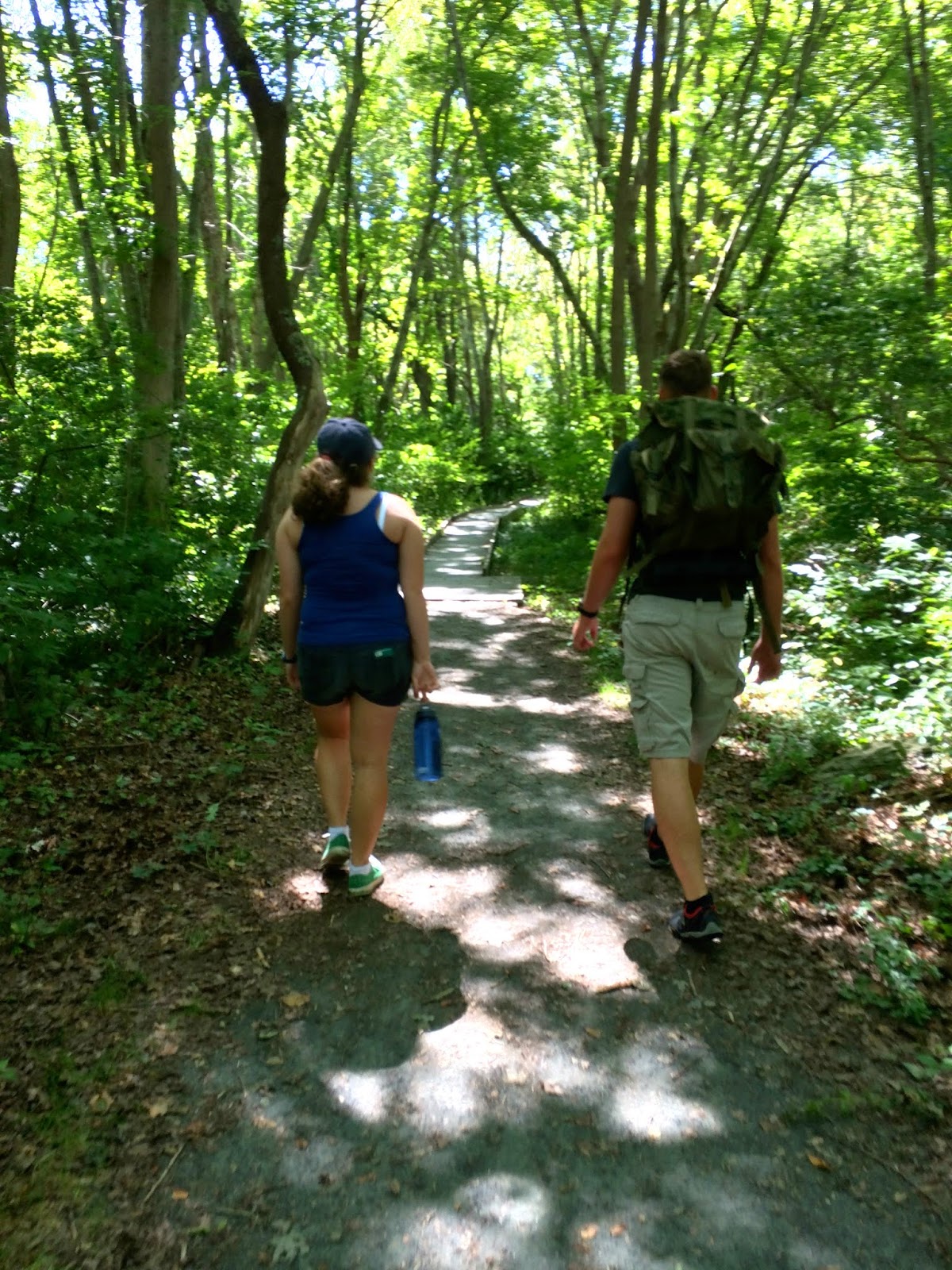 The crazy kids did some rock climbing, too. 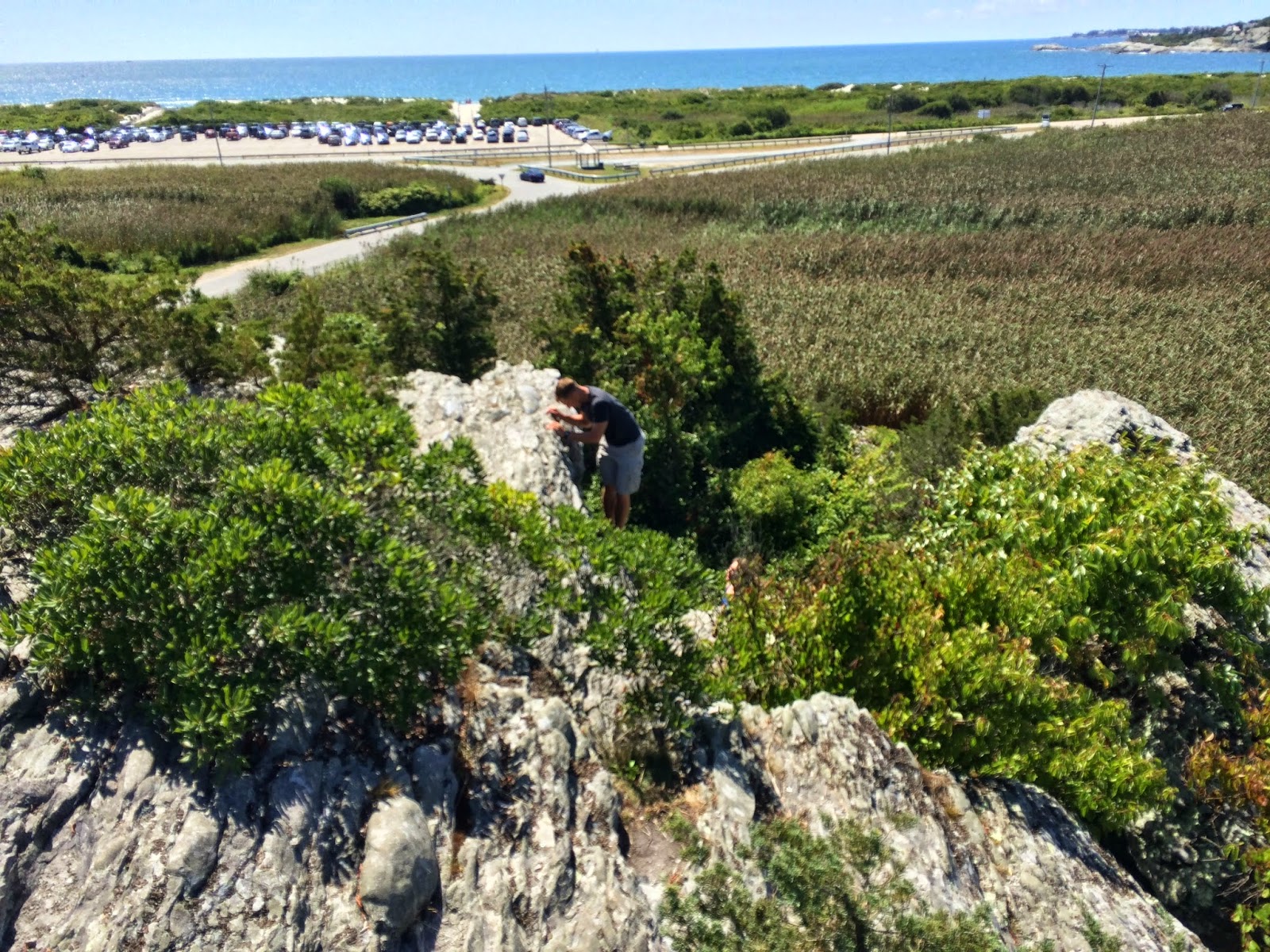 We drove Julia to New York on Sunday for her flight to Tanzania via Amsterdam. She had to prove to herself that she could handle all her own bags. JFK's international terminal is the best place for people-watching. 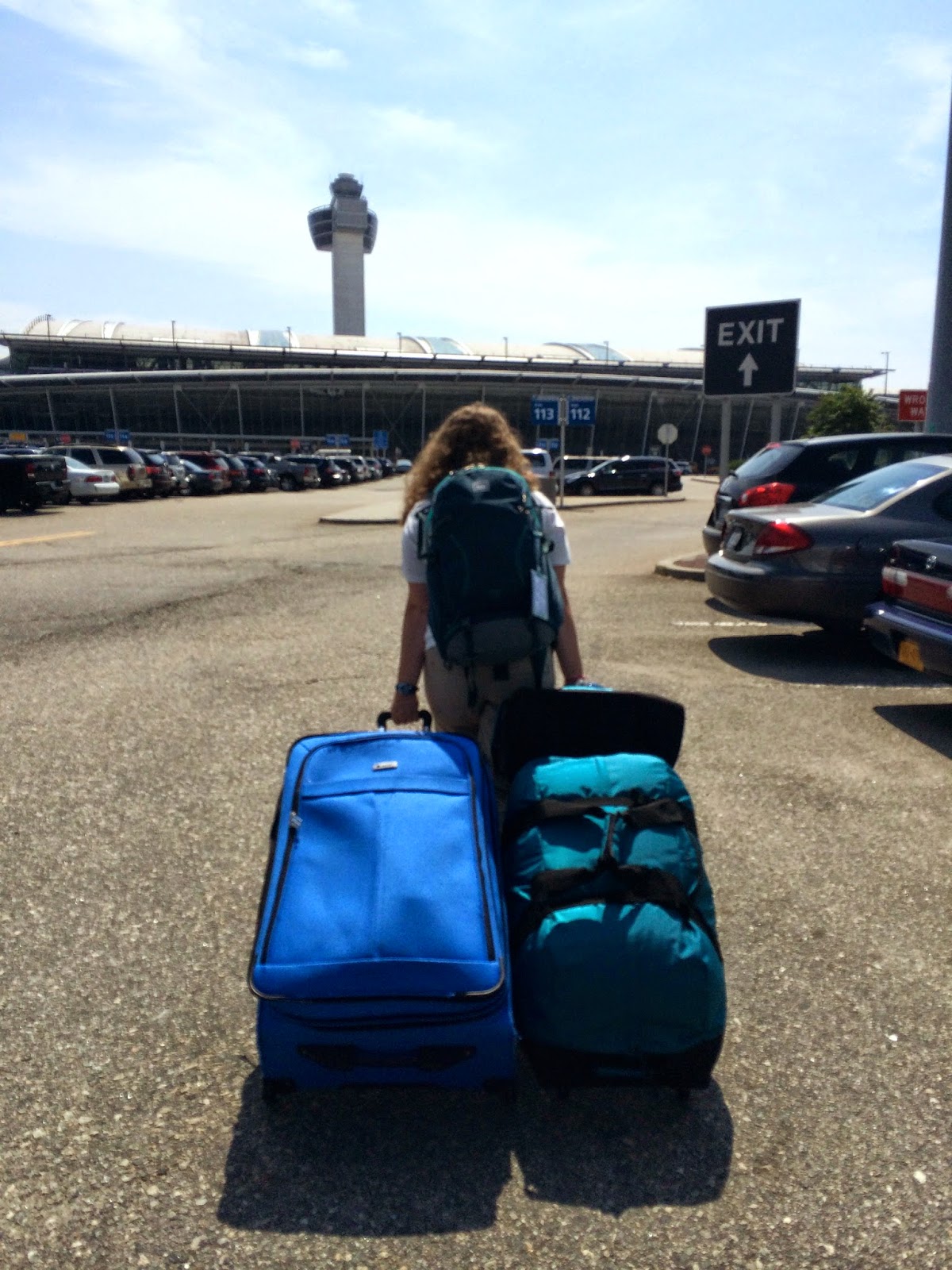 As we were leaving the airport, we got a weather alert about flash flooding. A few minutes later, I was driving through the worst downpour I have ever seen. We could barely see the road as we crawled along at 20mph. There was one giant puddle to drive around that caused some traffic backup. A few miles later, we were crossing the Whitestone Bridge and a rainbow appeared. That's always a good sign! 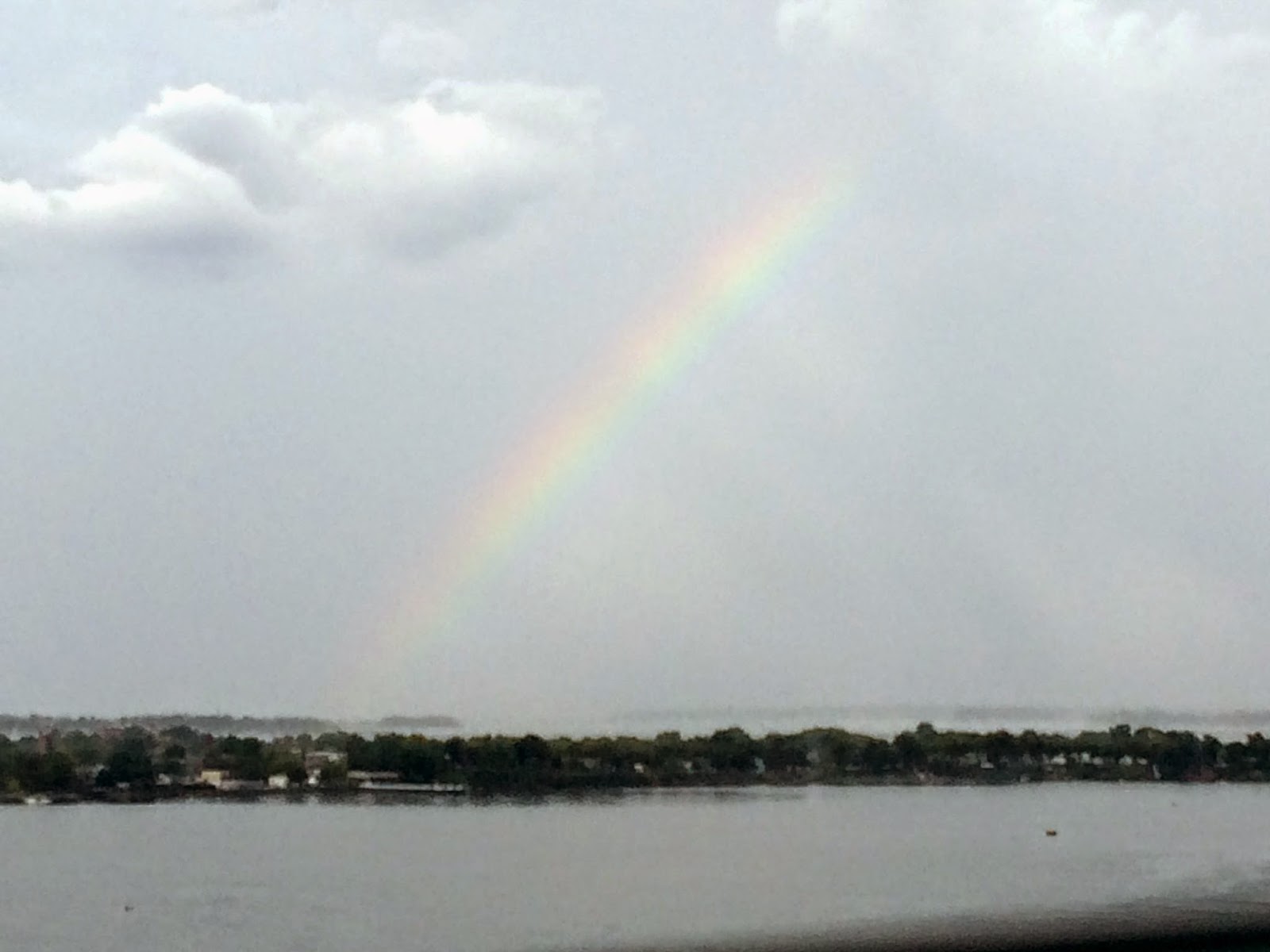 I got an iMessage from Julia at 2am our time. She was waiting at the gate in Amsterdam and was very excited! I've been tracking her flight all morning and she just touched down in Tanzania a few minutes ago. 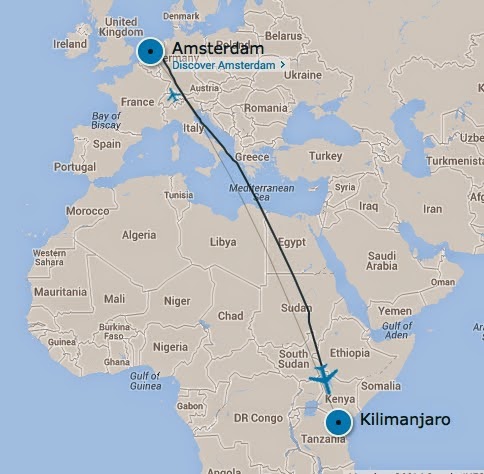 Pete heads back to North Carolina tomorrow and our nest will be empty again. It will be a busy Fall for all of us, so before you know it, we'll be together again.
Posted by Tina Craig at 1:02 PM 7 comments: