If you've been wondering where I've been for the last 2 weeks, I've been chained to my sewing machine, preparing for two craft shows this weekend! I've never done two shows in one weekend before, so I'm a little nervous about having enough stuff. I'm sure I'll be stitching on Saturday night to fill in! 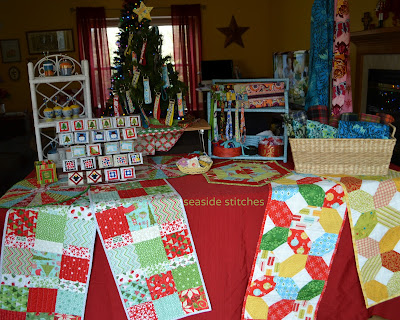 I'll show you more next week as the leftovers are loaded to my Etsy shop.

I'm calling this a Friday Finish, but it was actually a Thursday project. I started about 10am and finished the binding before 8pm. Of course, there were several breaks in between.

My Friend, Janet, saw this pattern in a magazine two years ago and knew it would be perfect for her Thanksgiving table. We shopped together for the fabric and I assured her she could make it herself. Then life got in the way, so she asked if I would make it for her. She's going to make some delicious party mix in exchange.  Works for me! 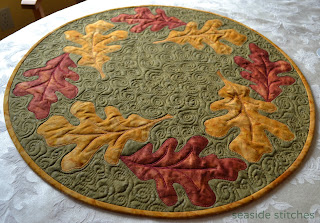 When I posted it to Facebook yesterday, Pat was surprised to see that I was appliqueing. I will only applique for family and my very best friends! 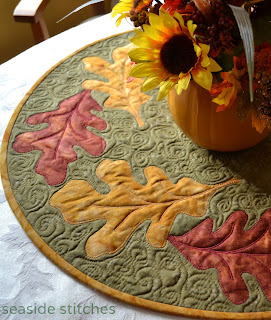 A Pinterest success story! The Twinery posted several fun projects using baker's twine. I pinned these trees and kept the idea in the back of my mind. I scooped up a package of tiny styrofoam trees the last time I was in a craft store. I already had the twine and a stash of tiny spools (my spin on the original idea). 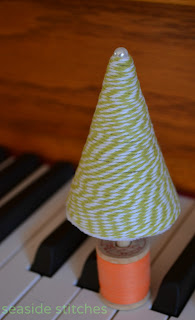 It was super easy to cover the tree with the twine. I started at the top and secured the end with a 2" long floral pin. Any cute pin will do. The twine actually sticks to the foam, but I added 2 vertical lines of glue for durability. After a few rounds, I found the right dowel for the trunk which gave me a handle to spin the tree as I coiled on the twine.

I thought I could cover the bottom with twine, but it just wasn't happening, so I used a circle of felt.

I can't wait to make more with my assortment of twine colors!
Posted by Tina Craig at 8:58 AM 2 comments:

I'm gearing up for local craft shows at the beginning of December. My goal is to make something I can sell each day. Yesterday was a very productive day! I stitched up a bunch of infinity scarves that are waiting for the openings to be closed by hand. That's a nighttime TV watching project!

Earlier in the week, I had stitched up a bunch of key fobs. They were just waiting for the hardware to arrive from GotLux Crafts. The 1" webbing is from Ryco, and the orange Kaffe ribbon is from Jackie's shop. I'm trying to decide if I should buy more hardware. They are quick and fun to make and will be an inexpensive gift item. 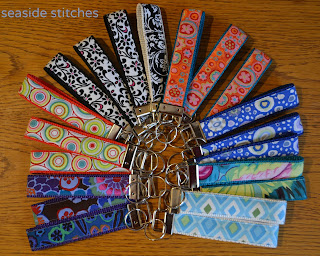 When I should have been finishing the scarves last night, I started playing with felt instead! I've loved this Betz White tutorial for years.  She used 2" foam balls, but I had 3" handy. They take many more rosettes! I put the 2" balls on my shopping list. 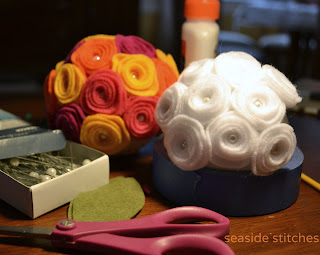 My friend and machine quilter, Pat Harrison, posted a sneak peak of my wedding ring star in progress. Isn't that fan motif stunning? 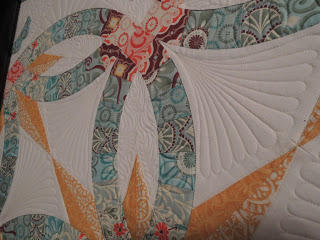 Have a crafty, quilty day!
Posted by Tina Craig at 9:16 AM 3 comments:

The top of Swap Soup is done! Well, I'm actually thinking about adding one more border to bring it up to twin size and to control the bias edges on those string blocks. Boy, do they stretch! 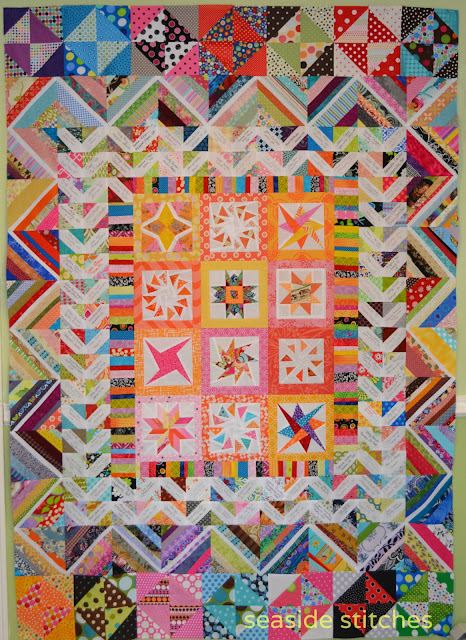 I listed the swaps and WIPs that are included in this quilt yesterday. Yes, I added the polka dot blocks, too! Those borders were a bit too long. What to do? Chop the ends off! Did I lose the points? Yes. Do I care? Nope! 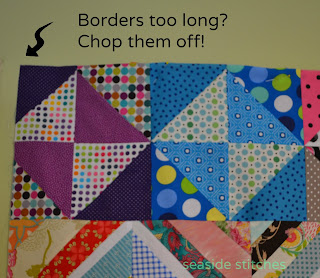 My husband and son really like this quilt. My mother knew I did a lot of swapping, but had no idea how many other quilters were involved. The whole family enjoyed reading the names and cities on the siggy blocks. 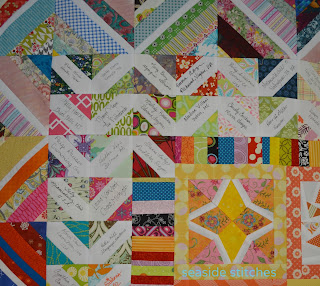 I'm hoping to get this puppy quilted next weekend at an all day sew-in. It's actually a craft weekend at a local hotel, but I can only make it on Sunday. I'll bring this and my unfinished scrapbook of Italy vacation photos. Think I can get both done in one day?
Posted by Tina Craig at 9:20 AM 2 comments:

I'm back to my sewing machine after three days without power. It's nice to be creating again!

I joined Threadbias recently and immediately joined a UFO group. One of the projects I hope to finish was originally titled Scrappy Fun. I was hoping to use up stacks of random swap blocks from several different swaps.

The project was on hold temporarily while I waited for round 2 of the siggy swap blocks to come home. They arrived this week and I started playing! 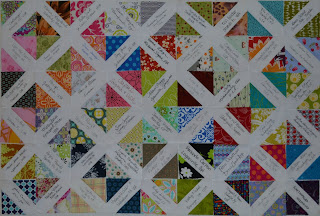 Last night, I had this arrangement. 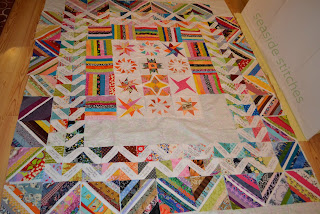 After adding borders to each paper pieced block, I now have this! And a new name:
Swap Soup! 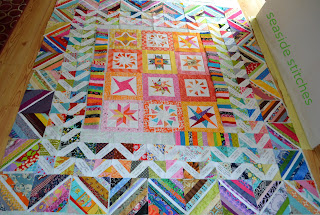 I love how this is coming together! I'm compiling a list of all the quilters who made blocks for the label. Unfortunately, the TWPP group has been taken down from Flickr, and not everyone labeled their string blocks.

I just remembered that I have a box full of hourglass blocks that I made from polka dot charms that I swapped for. I wonder if there are enough to go all the way around the outside border.  Hmmm...
Posted by Tina Craig at 11:10 AM 2 comments: