I wasn't able to do much this week while my wrist healed from tendonitis. I'm feeling so much better, but not quite 100%. I'm returning to quilting slowly.

New/Old Project: Since I couldn't sew, I cleaned out my sewing room last weekend. I found 25 hexagon flowers that my mother started about 20 years ago. When she moved into her apartment 5+ years ago, I rescued a couple of her WIPs, including this one. Most of the flowers were done, but there were some cut hexagons waiting to be pieced. 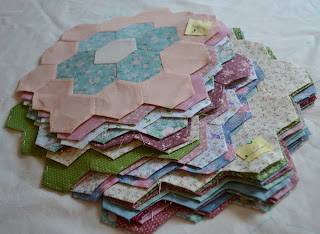 At some point, I had finished the piecing and decided on a layout. I had planned to piece them together with muslin paths, but since they were hand pieced, not using English paper piecing, they are all different sizes. Piecing them together would have been a challenge, so on the shelf they sat. 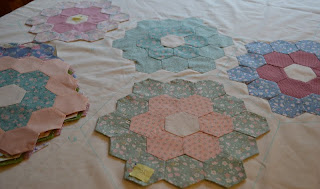 When I pulled the pile off the shelf, it was wrapped in a very large piece of muslin. Divine intervention suggested machine appliqueing the flowers onto the background! All the flowers have been pressed, starched, and seam allowances basted under.

Last night, I drew out a hexagon grid on the background with a water soluble pen and started the applique. I started in the center, and I'll work my way out and around. The grid and all the flowers are numbered. I pinned down the first one before stitching. With all the twisting and turning, it got a little poofy. I glued down the second one with a washable glue stick and it worked like a charm!

I'm hoping to finish this by the end of the month as a birthday gift for my mother. This really has become the Year of the Hexagon here at Seaside Stitches!

Have fun visiting the other WIPs!

Such a good idea - it's going to be great! Glad you're starting to feel better...

your mom will love this quilt!

Those hexies are so pretty! Glad your feeling better - cleaning out the sewing room sounds like a great use of your time while you're healing. Want to come clean mine? : )

Thanks for linking up to WIP Wednesday!

What a good solution for the hexies. Your mom is going to be thrilled. :D

What a great project to find & finish for your mom - sweet!

Great idea! too bad it's too late for me. I bought some pieced hexagons on e-bay thinking that I just had to add the trails and be done with it, but they were also hand pieced and not very even so I started paper piecing and doing it all over again.(Bonus: Is such a time saver not too worry what prints go together, I piece the way that lovely lady intent it to be :)