We got a little bit of snow yesterday! Winter is really here. 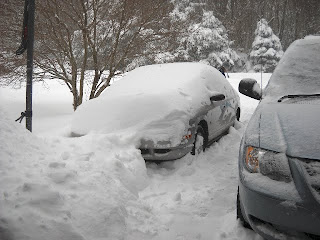 I went out early to start digging out my car. Then the big guns arrived!
Julia and I were on a mission. We had to get out and make it to Providence for Wicked! 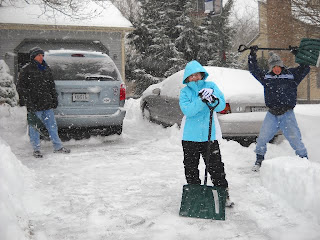 Our street is out there somewhere.
Just one lane was plowed, and not very well.
Our biggest challenge was my mother's street and driveway to her apartment building. Julia was a trooper! I'd get stuck, she'd dig, we'd go a little farther, she'd jump out and dig some more. 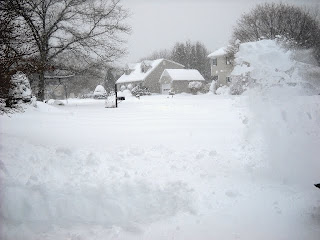 Leaving my mother's building, we had to go uphill! We powered through with Julia's expert digging, but I had to leave her behind for fear of getting stuck. I didn't stop to pick her up until I was on clear, level ground. It reminded us of this old family story.

Christmas of 1966, my grandparents insisted on attending midnight Mass. My father and brothers gathered them up and off they went. During Mass, a foot of snow fell! The car would get stuck at every intersection, so my brothers would get out to push. Knowing he'd get stuck again, my father just kept driving, with my brothers running behind, ready to push at the next corner! When they reached the dead end street where the Other Grandma lived, there was no way Dad was going down there. So my brothers dragged Grandma to her house on a sled! 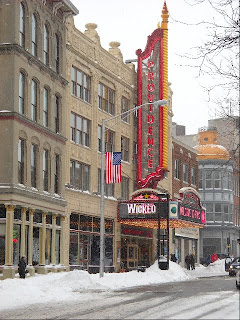 We made it!
It was a harrowing drive, but we took it slow. I learned to drive in upstate New York and took my driving test after a big snowstorm. I was confident in my abilities (so was Bill!), but always worry about other drivers. 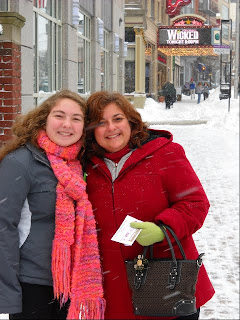 On the way, I instructed my mother that at the end of the performance, she was to announce that this was the best show ever and well worth the drive. Right on cue, she recited her lines with a big smile on her face. 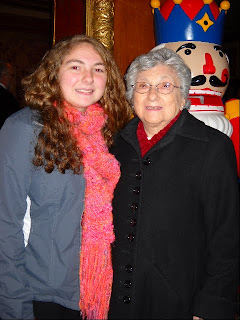 Wicked really was the best show we've seen (up there with Lion King). But we'll remember it more because of what we went through to get there. At least we didn't need to pull Grandma on a sled!
Posted by Tina Craig at 8:33 AM

That is totally impressive - Give Julia a big hug, I think I might have given up!

Glad you had a great time!

That is one of my favorite stories. As I was reading about Julia that is the first thing I thought of. Like father, like daughter.