Bill and I are celebrating our 25th Anniversary today. We've added a few pounds and gray hairs, but we are still as happy together as we were in 1989. 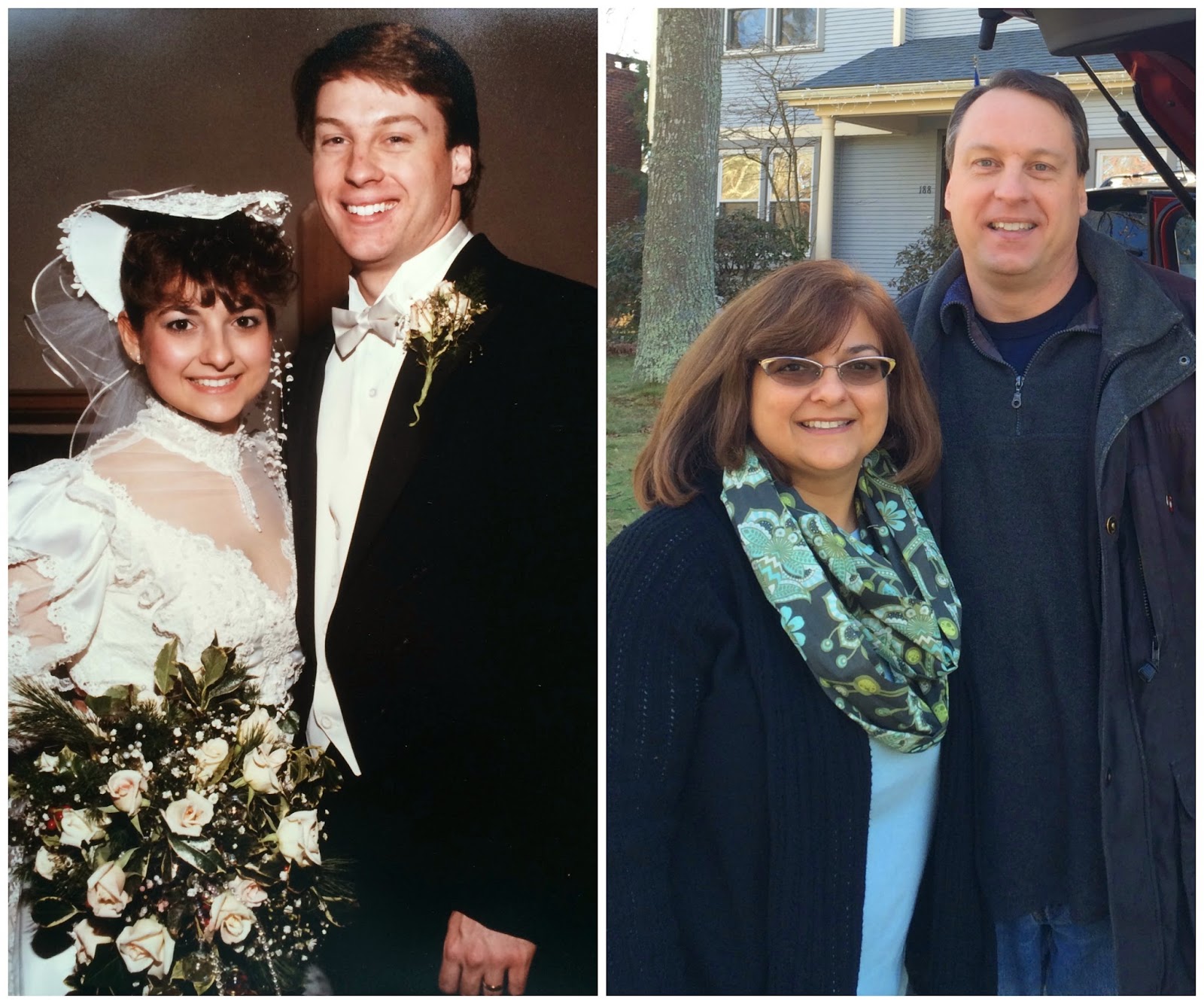 My real reason for posting today is to show you the quilt I made for him. I was inspired by Thomas Knauer's code quilts. I started out by designing a Braille quilt, but I just wasn't feeling it. (ha!) I switched to Morse code because it is more meaningful to us as Bill is a communications guy. 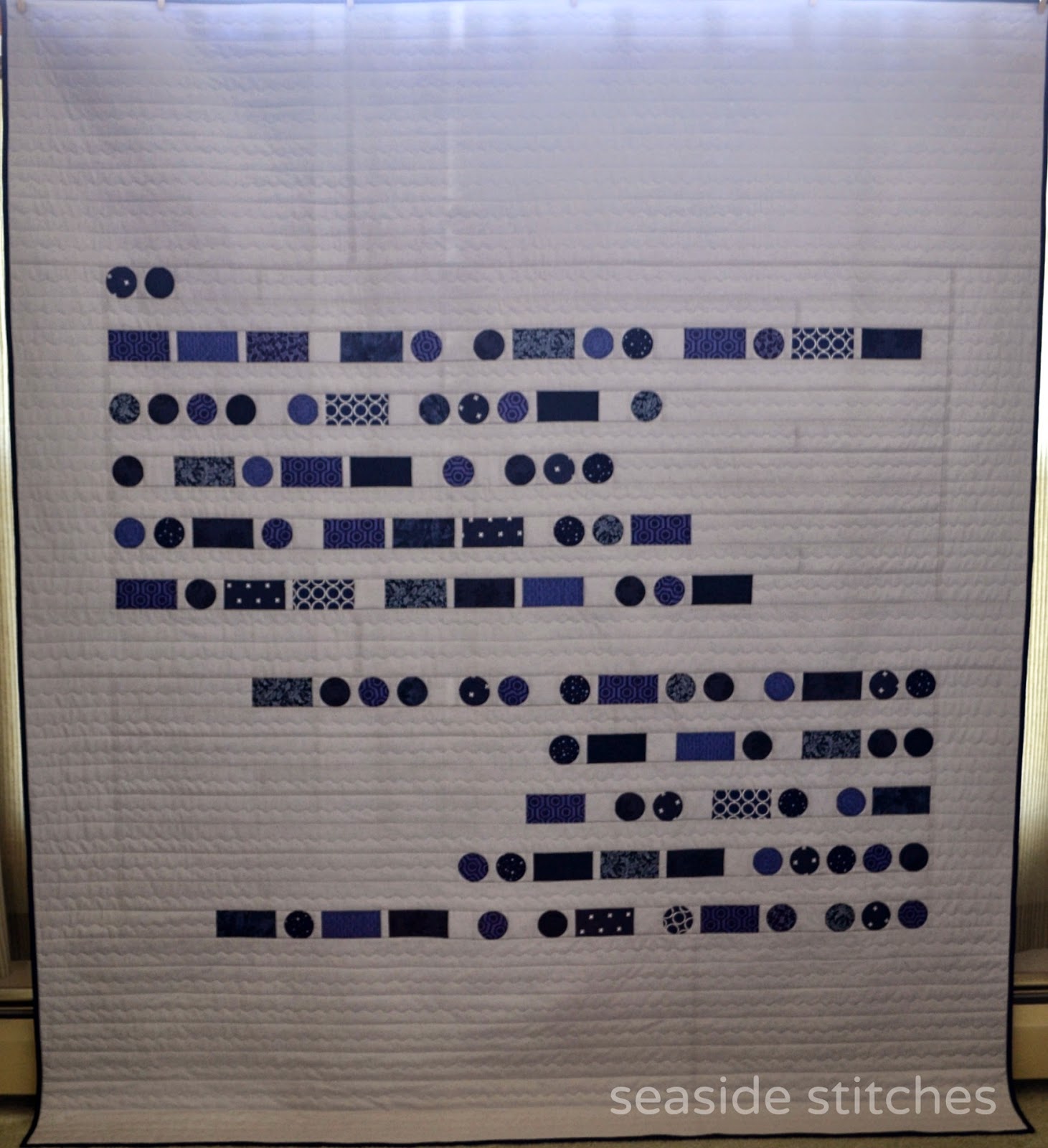 If you follow me on Instagram, you may have seen references to the super secret project. I couldn't really start until the wedding quilt top was done, but I did start prepping circles when I needed an applique break. The first photo is dated 11/7, but I'm pretty sure I started a day or two before that. The whole top was pieced in just two days, 11/17-18.  I knew I had to have the top done before Thanksgiving and our trip. 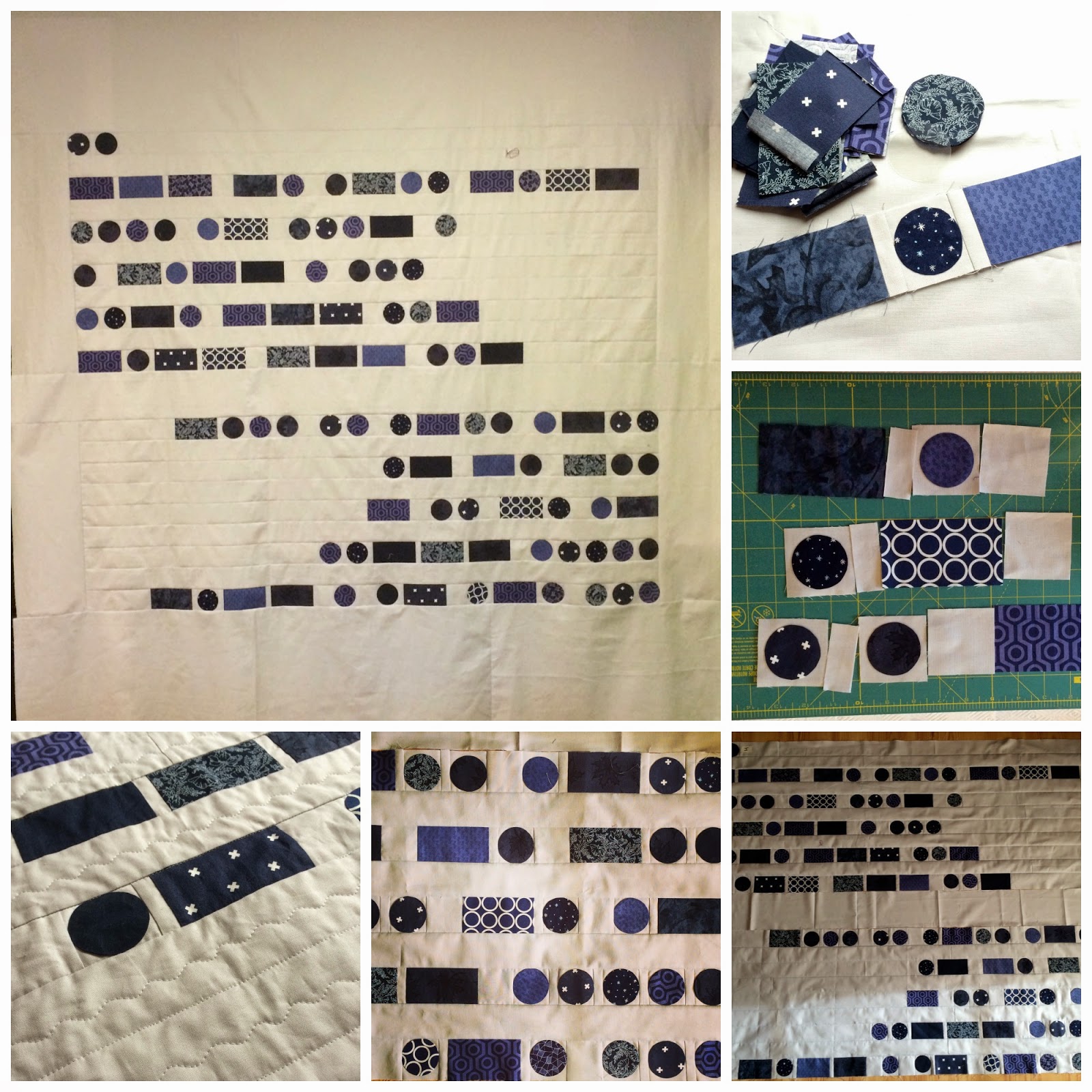 I decided early on that I could kill two birds with one stone and attach the circles with the quilting. I'm not a fan of raw edge applique, so the circles were prepared using Erin's method (without the stuffing) and then glue basted to the gray background squares. 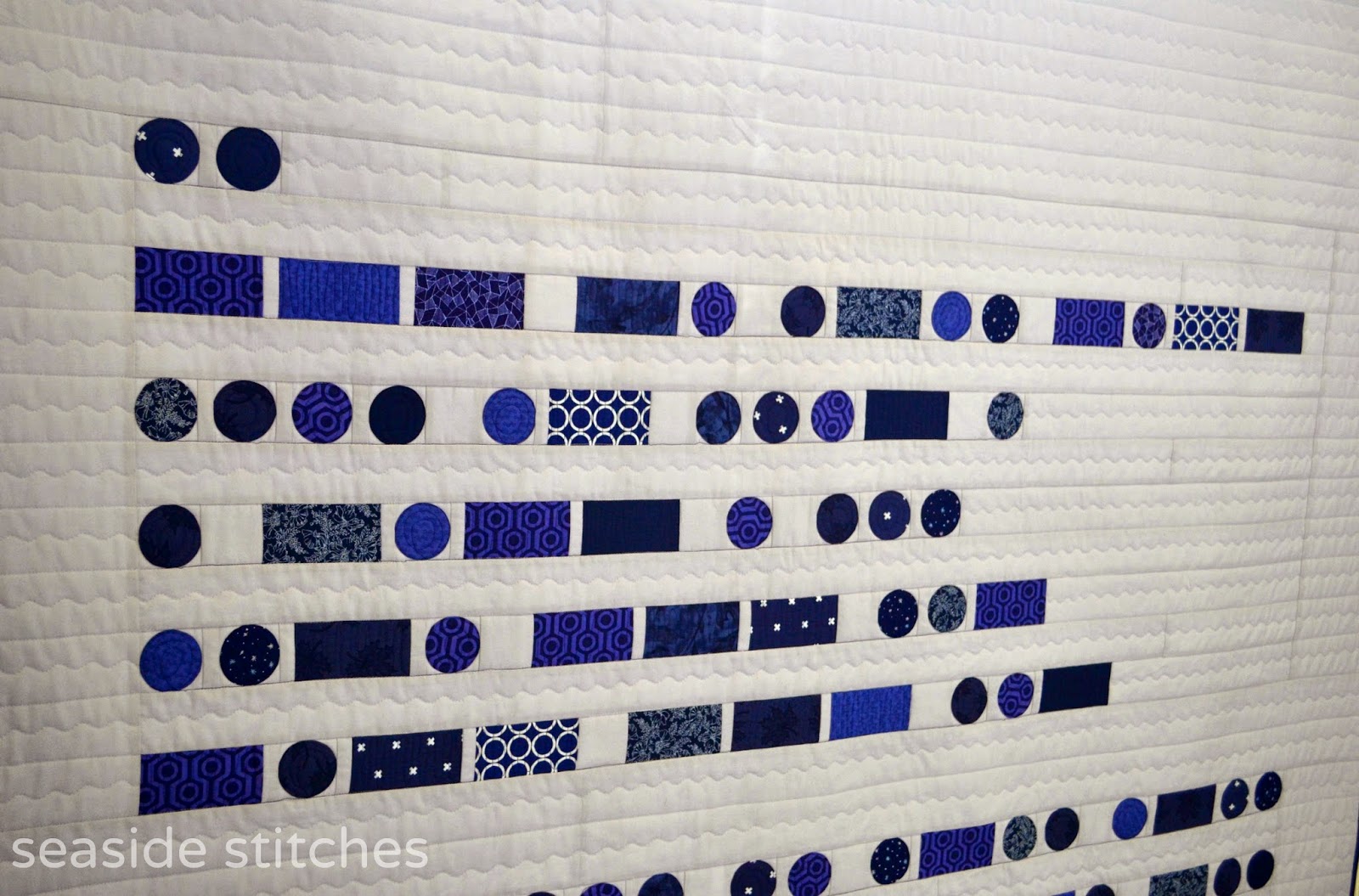 I used an assortment of blues from my stash, some leftover from Pete's quilt. The background is Kona Silver. I picked it out for the color without realizing how appropriate it was for a 25th anniversary!

I didn't leave myself much time for quilting. I only had 2 days to get it done before Christmas. I had originally planned something completely different to do something fun with the negative space, but it wasn't practical with limited time. Straight lines and serpentines had to be employed. 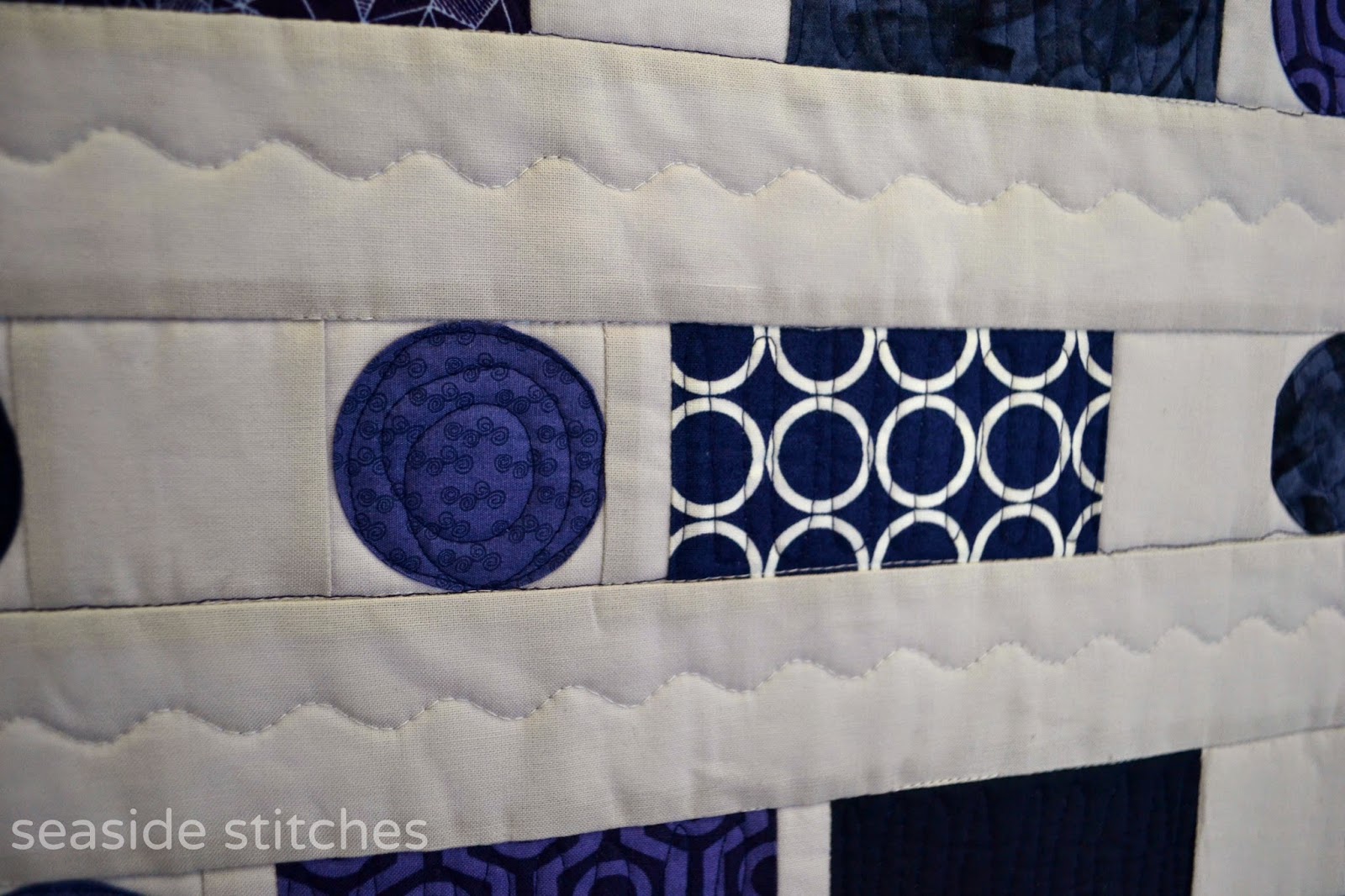 I still needed to do some free motion in the blues to stitch down the circles. I used Aurifil 50 wt in gray #2600 and navy #2784 for the quilting. 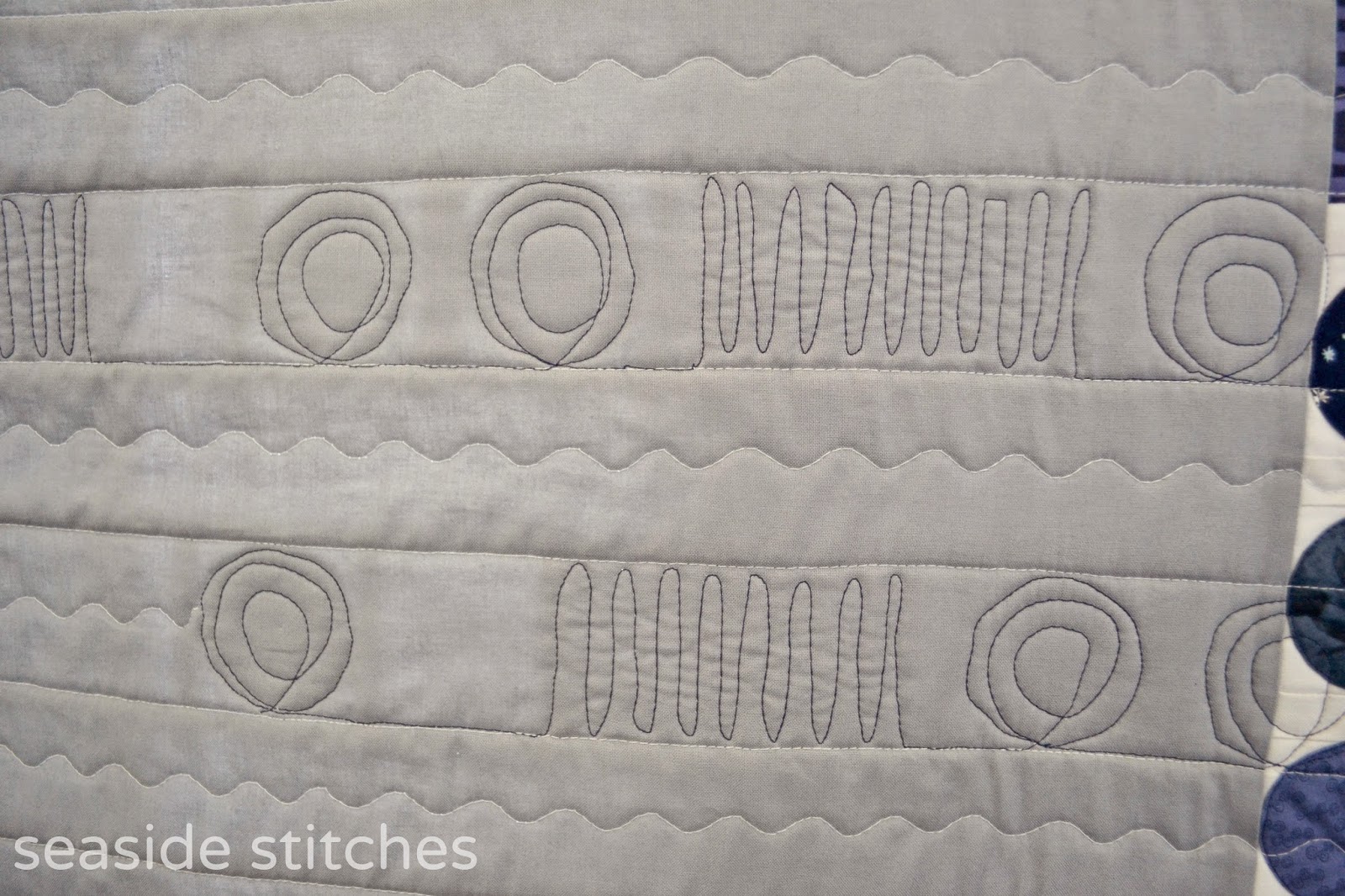 The back was pieced from a big piece of Kona Medium Gray and a strip of blue print leftover from the back of the wedding quilt.

I had a small pile of dots and dashes leftover- just enough to spell out love for the label!

I presented the quilt to Bill at our anniversary party on Saturday. I gave him a Morse code key and made him figure it out! He knew what the first part said after just the first couple of letters. 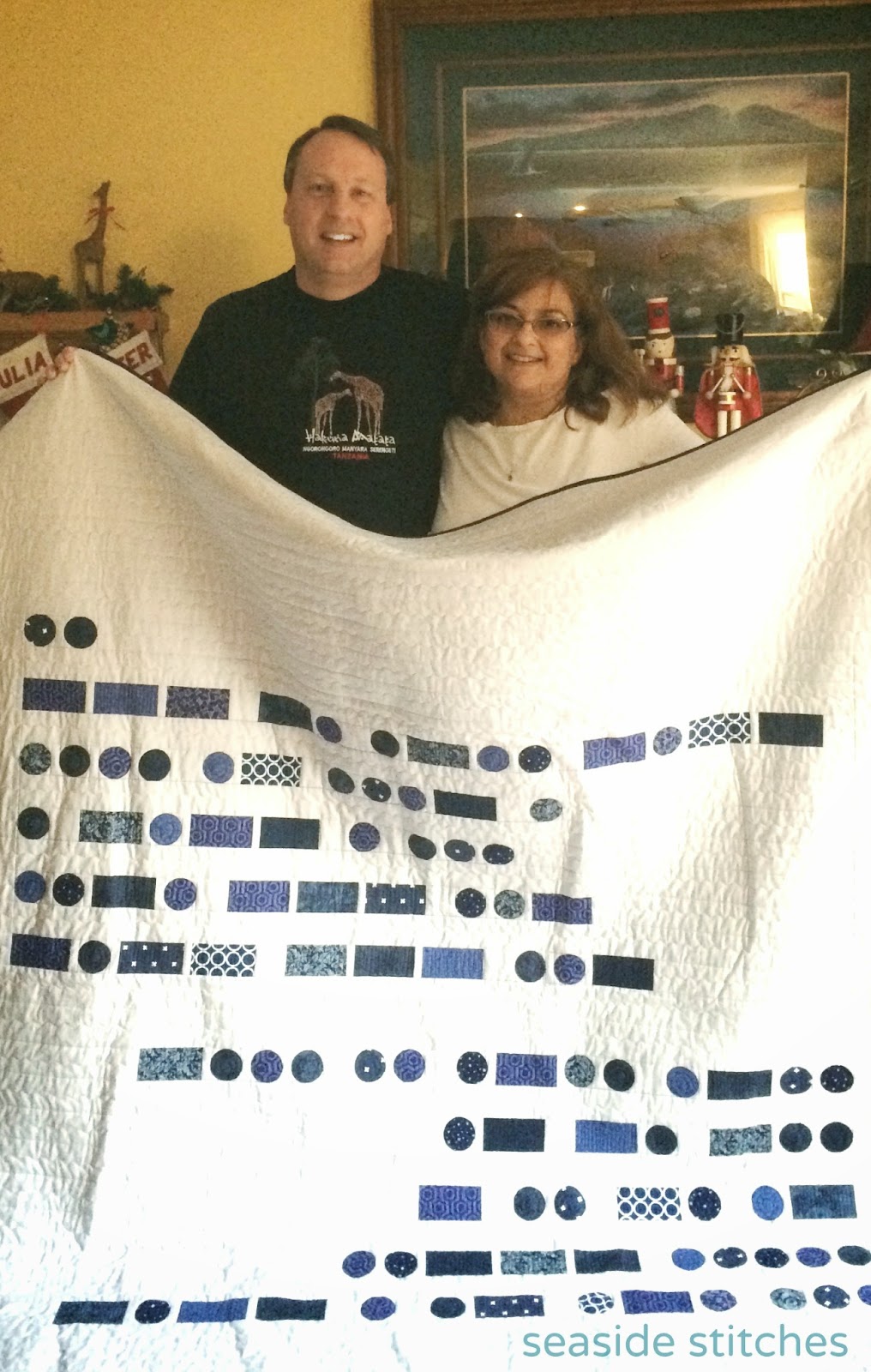 It finished a little bigger than I planned. It covers the whole top of our bed. 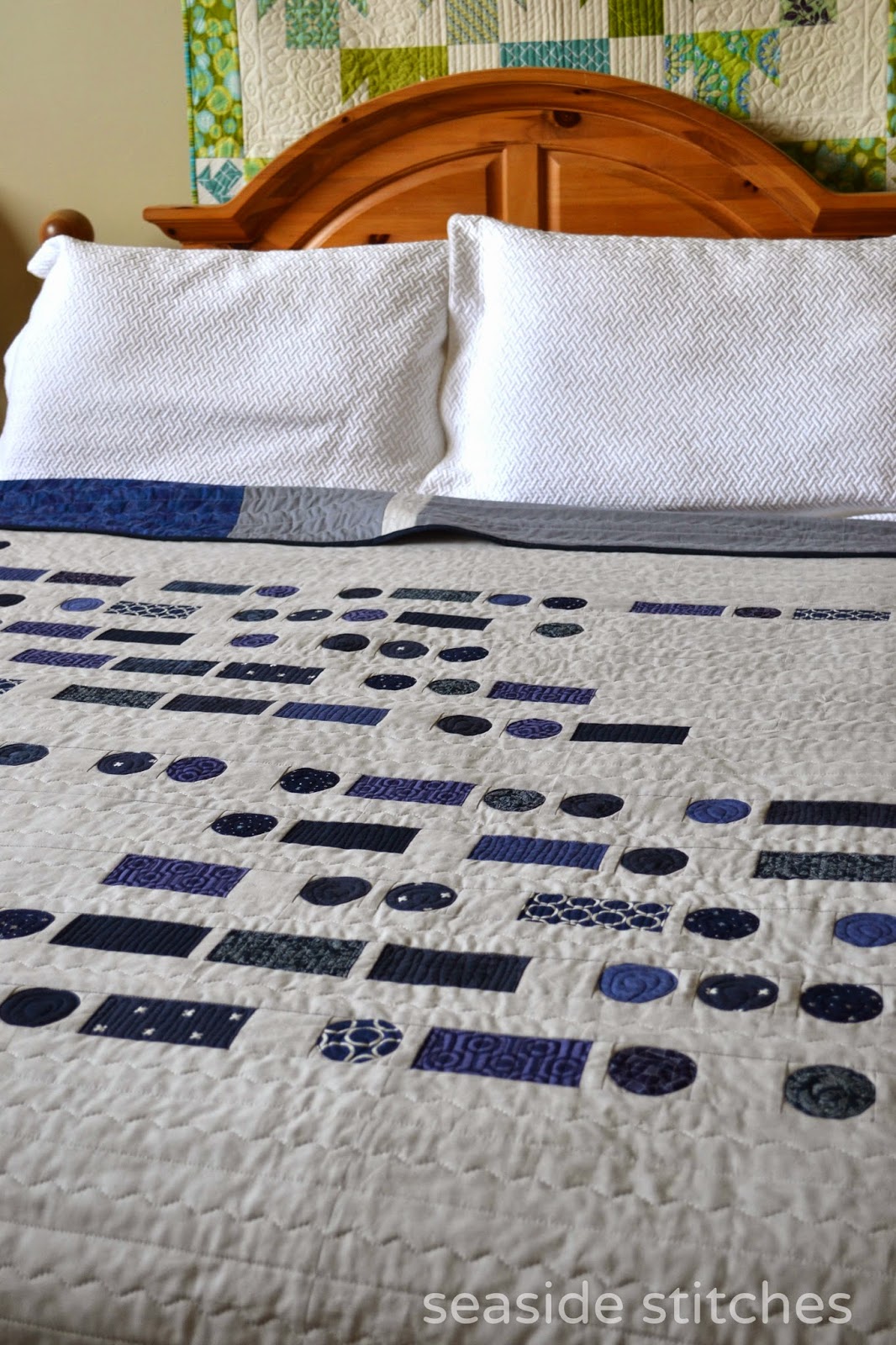 Overall, I'm really happy with how it turned out. And Bill loves it! 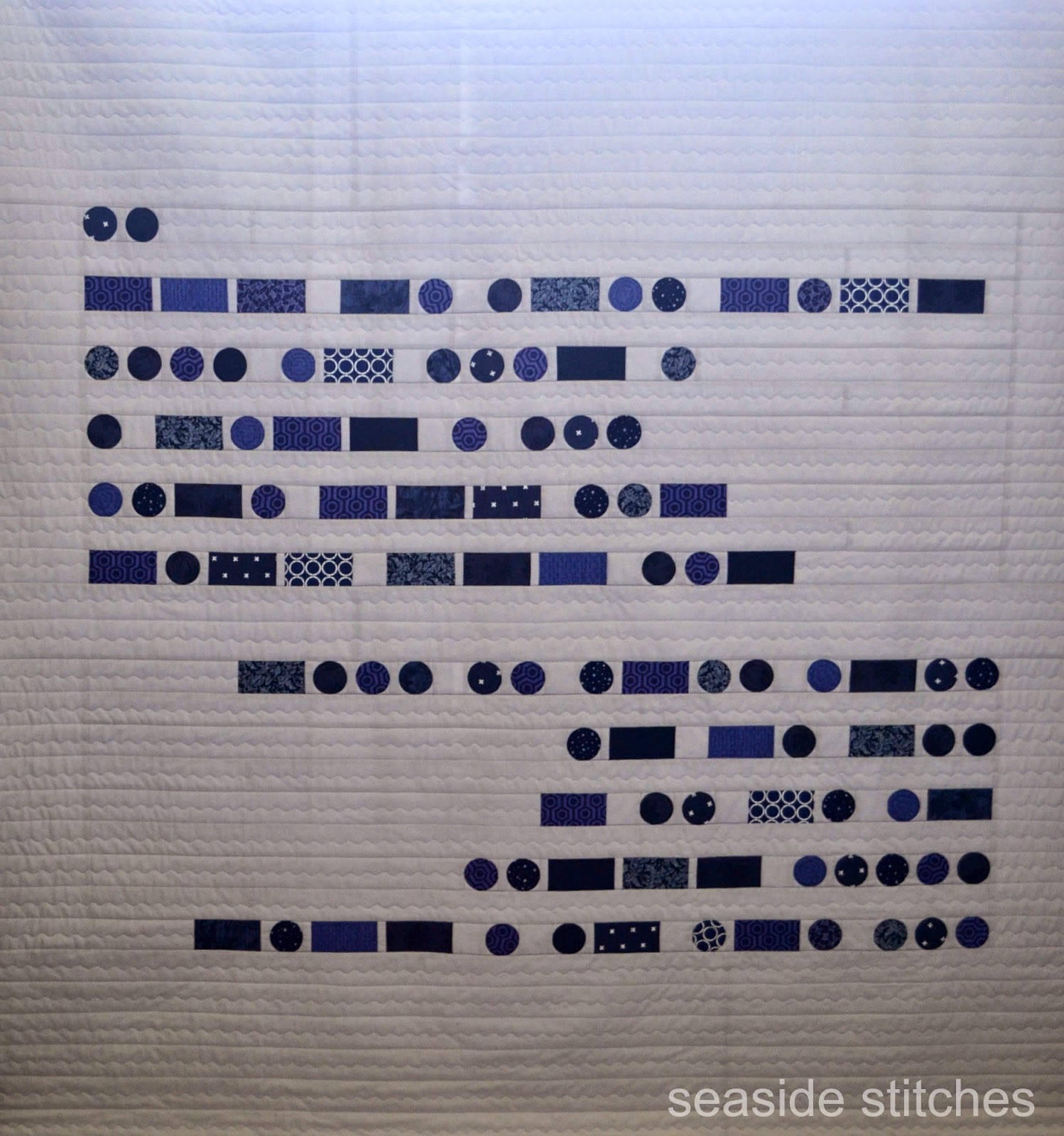 P.S. If you don't want to take the time to decode the message, it says:
I only have eyes for you
Bill and Tina 25 years
Posted by Tina Craig at 1:15 PM

Tears to my eyes. The sentiment and quilt, so very, very, special. Congratulations

Very clever idea! Wishing you both a happy anniversary and many more!

That is so cool!!!! Wonderful job and congratulations!!! Wishing you happiness in the next 25.

I love this, Tina! The concept, fabrics, quilting, the reason for making it - it's all great! Thanks for sharing :)

Fabulous Quilt! Love the whole look of it … and the sentiment … just beautiful! Congratulations on 25 years!

I love it, what a wonderful quilt design for your husband and very clever. Happy Anniversary and may you have many more years of blessings to come.

Your quilt is SPECTACULAR and it sounds like it was the perfect quilt to mark your anniversary. I loved the then and now photos of you and your husband, too.

congratulations on your 25 years of marriage. What a wonderful quilt and there will never be another one like it. It looks splendid on your bed

Dear Tina,
what a fantastic quilt! And the message is such heart-warming (is there such a word in English?) - I hope, you know what I want to say. And congratulations on your Anniversary - youcan really be proud to get this. Unfortunately it is not the rule anymore today. Hopefully we will reach this, too, but we know each other for about more then 15 years, so I think we are on the right way.
Have a great start into 2015 and all the best for you and your family!
Greetings from Germany, Rike

Great idea for your quilt. My Auntie and Uncle were married in 1989 and her dress was the same style as yours!

Congratulation to both of you. I really liked your blog as well as your quilt designing. Guys, I want to celebrate my wedding anniversary and want to throw a grand party. So, for all the party arrangements, I need some ideas on event planning. Please suggest me some ideas.

I love your blog!! I've been looking through it. Your picture of the oriole is what got me here!! I'll check out your instagram too. And this quilt is amazing. What an idea!! It is beautiful. Thank you for sharing it.
Deb Wheeler