How to Sew on Scout Patches

As the mother of a Gold Award recipient and an Eagle Scout, I've sewn hundreds of patches on uniforms, blankets and tote bags. 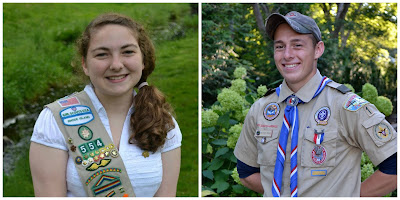 In fact, I stitched 130 patches onto Pete's blanket last weekend. It was time to get the 2010 Jamboree patches out of that shoebox! This is what I learned... 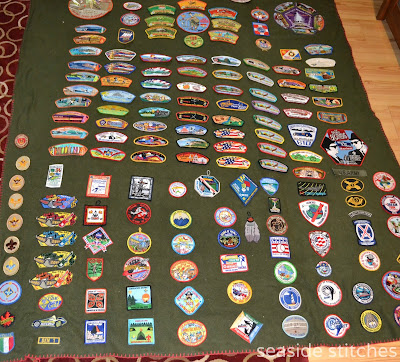 Any scout mom or grandma knows that most patches are backed with a plastic-like stabilizer that seals in all the embroidery threads. That is not fusible web! It is almost impossible to stitch through by hand, so I use my machine. (There are some new iron-on Girl Scout patches, but I've seen many of them fall off. Add some stitches to be safe.) 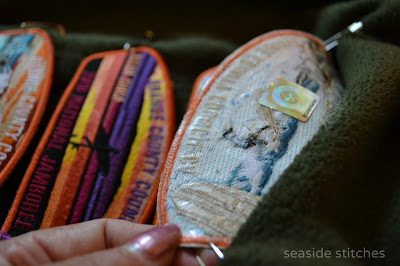 I use a mono-filament invisible thread in the needle and a regular thread in the bobbin that matches the color of whatever I'm adding the patches to. You might need to loosen the top tension if you see too much of the bobbin thread coming up through to the front of the patch. 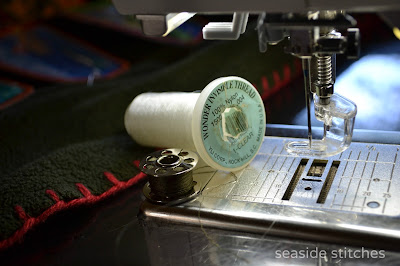 Choosing the right needle is a puzzle! I had Superior 90/14 topstitch needles on hand, but they were not strong enough. I liked the feel of the ballpoint needles on the fleece blanket, but again, the 100/16 needles snapped if I hit something they didn't like. I had the best luck with 110/18 jeans needles. I only broke one of those. It's a good idea to wear glasses or safety goggles to protect your eyes from flying broken needles! 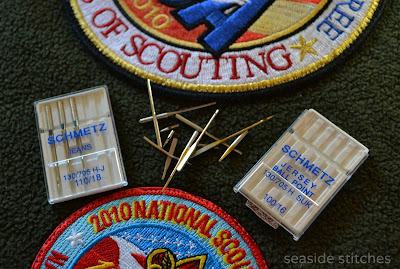 Position the patches and use safety pins to hold them in place. If you can't get the pins through that awful plastic backing, tape them on, removing the tape as you go. 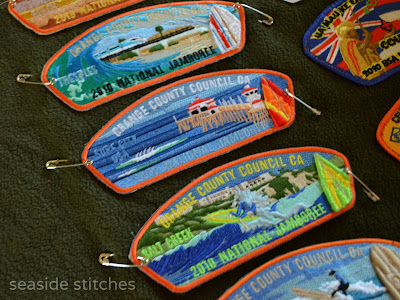 Drop your feed dogs and use your embroidery or free motion quilting presser foot. I bring the bobbin thread to the top so it doesn't make a knotted mess on the back. Start stitching, SLOWLY, around the patch. With the feed dogs dropped, you will need to move the patch/blanket under the needle. This way, you don't have to turn the whole blanket to get around the patch- think hula hoop motion. After you get all the way around, overlap the beginning about an inch before moving to the next patch. Lift the presser foot, slide the blanket over, and start the next patch. I trim all those connecting threads between patches later. If there are two patches abutting each other, you can just keep stitching. 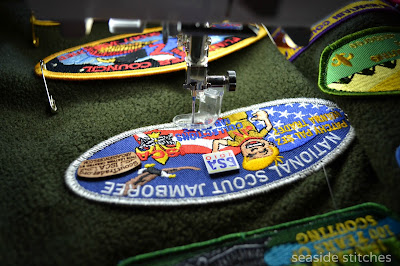 Uniforms are a little easier. (That double layer of polar fleece was not my friend.) By free motion stitching, you can slide the sleeve onto the free arm of the machine and easily stitch around the patches. 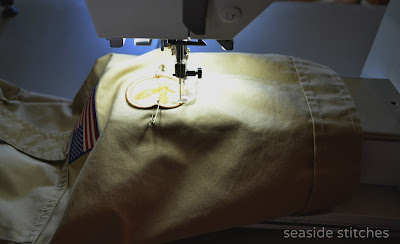 In this closeup, you can see that I'm trying to stitch in that ditch where the satin stitching meets the patch fabric. That seems to be the point of least resistance. 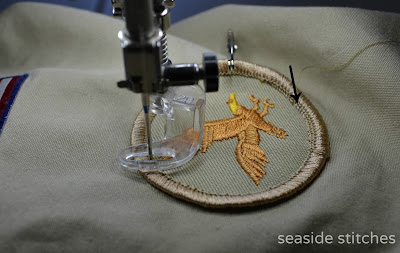 I really try to avoid hand stitching, and I have been known to sew pockets shut by machine stitching pocket patches! In this case, I decided it would be nice to do it right, and hand stitched the Eagle Scout badge. That was a tiny pocket, because there is a pen slot on the left side, so it was hard to fit a hand in there to keep the pocket open. If you use something like a credit card or needle case inside the pocket, you can stick the needle in until it hits the plastic, and make your stitch without closing the pocket. 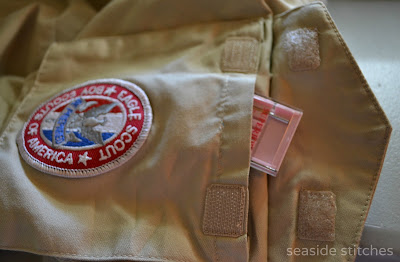 This is what happens when your son earns a patch at camp and sews it onto his dirty shirt by himself! His friend made fun of him for sewing the pocket shut. Haha! 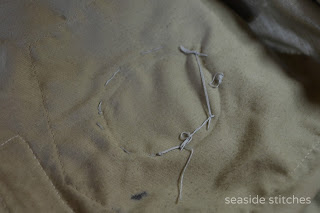 When you are done, use hair elastics (hair ties, pony tail holders) to keep your thread neatly on the spool. This must have been a Sew Many Ways tip, but I can't find it right now. We'll just give Karen credit for it anyway, because she's awesome! 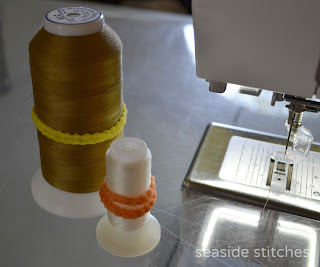 I hope this helps some scout moms. Enjoy your time in scouting!
Posted by Tina Craig at 7:00 AM

I just wanted to congratulate you on the kids. I am mother of 3 eagle scouts and very proud. Years ago, probably 15, we went to an eagle scout/gold award ceremony for a brother/sister. They don't happen very often. I can't tell you how many patches I've also sewed on and also for other parents. They are a needle killer.

I thought I was the only one who sewed pockets closed putting patches on! Got a request for a blanket like Pete's - "when I make Eagle Scout" - from DS#2. I told him that we should focus on finishing up Tenderfoot first!!

I had to sew on my BFs patches by hand because at the time I didn't have a machine. They kept falling off because he would catch them on something and rip them half way off. Then he got a job where they would provide patches that had to be sewn onto every shirt any of the officers wear, so I didn't understand why on earth don't they just have them embroidered directly on the shirt!? It got to the point where I told him this is the last time I'm ever sewing patches so if you need it again you have to find someone else. I hate patches with a vengeance. We even tried iron on stuff, and even that didn't work too well.

Tina - victor over patches!!! The congratulations go to you this time! How is his quilt coming along?

I know this is YEARS after you did this but THANK YOU THANK YOU THANK YOU! I am a mom and leader of a fourth year Girl Scout. I have been breaking needles, tangling thread to epic portions (needing to get screwdrivers and disassembling my machine.) I ended up sewing on every patch spending every night for weeks getting them all on. My husband begged me to learn to do it so I looked it up online, yours was the first and it told me EVERYTHING! One quick trip to Walmart to get "your" stuff and wal la a completed uniform done right, only one tangle that was easy to fix and one broken needle instead of ten. (And that was when I was doing a patch on a patch on a patch on the uniform, thank you whoever designed THAT!) you saved my fingers, eyes and a whole lot of my time!

I like to use a washable glue stick to hold the patch in place as I sew. Just rub a bit of glue on the back of the patch and press to the fabric!

I am a second year mom trying to use a sewing machine to sew on patches. However, I am having a lot of difficulty getting my sewi g machine to work right. I was able to sew a few patches, by theny upper thread started to break. I am now only able to see a few stiches before the thread breaks and my needle will seize up in me. I have check to make sure that thread is properly threaded, I have loosened the tension and the only conclusion I can come to is my machine gears are broken. So my question is, what is the best sewing machine to use for patches that won't cost a lot of money?

This article is very informative I've read this article for improving my embroidery skill and it's really worth it thanks for posting. Digitize your monogram with professionalism by using our monogram digitizing service.

Such an informative article for all the embroidery related people this type of blogs surely increase ability on embroidery work.

Fantastic blog for embroidery lover it will surely develop our skill in embroidery really informative. Now you can get online embroidery digitizing service in a cheap cost via choosing us.

I just sewed my son's scout patches on..what a battle! Ended up breaking 2 needles on my machine. I actually stapled them on to hold them in place because I couldn't get pins to go through the patch!

Fantastic blog for embroidery lover it will surely develop our skill in embroidery really informative. Now you can get online embroidery digitizing service in a cheap cost via choosing us.